An expected return to higher bank leverage ratios on March 31st may result in negative interest rates on banked money and subsequent over-consumption with run-away inflation, bank runs with hoarding of paper money, as well as increased demand to own US-minted gold and silver coins.

What are leverage ratios?

On April 1 of 2020 US banks were allowed to reduce their leverage ratio (from 3% to 2%) to increase the amount of available funds to needy households and businesses affected by the COVID-19 pandemic.  (Leverage ratios are the amount of funds banks hold to withstand a negative shock on the assets they hold on their balance sheet.  What is in play are supplemental leverage ratios installed in the wake of the 2008 banking/lending crisis.)

Supplemental leverage ratios are applied to banking institutions with more than $250 billion in total consolidated assets, in other words, present the most risk of failure should a financial collapse occur.  The ratio or cushion to withstand a collapse of the banking system is 5% (supplemental) for the very largest banks.

The financial classes carve out their own bailout

Now banking regulators and Congressmen say they may not renew that provision (3% to 2%), especially since bankers largely used these extra funds to buy-back stock and distribute dividends to their shareholders rather than come to the aid of small businesses and other entities in their time of greatest need, as an article at Bloomberg.com indicates.

To extend this variance in leverage ratio would be tantamount to allowing the investment class to plunder funds intended to assist American households and business enterprises clobbered by the COVID-19 lockdowns.

A report posted at TheAmericanBanker.com says Senate Banking Committee Chair Sherrod Brown (D-Ohio) urged Federal Reserve Chairman Powell not to extend the relief for banks that have continued to pay dividends to shareholders “rather than invest in the real economy.”

As an article posted at GoldMoney.com states: “At this late stage there is no sign of the supplemental leverage rate being extended.”

The banks do not have balance sheet capacity to take on this expansion (2% to 3%) and will likely have to turn away new depositors by charging negative interest rates.  Banks would do this independently of any policy change from the Federal Reserve bank that distributes money to US banks.

All this is occurring when Americans, who have received stimulus funds from the federal government, have been depositing their money into banks or paying down credit cards rather than spending their money on consumer goods.

Will this be the mother of all bank runs?

Congress and banking authorities had better watch carefully what they are about to hatch – the mother of all bank runs.

Americans may just take the money they wanted to deposit in their savings accounts and begin to cash them at the teller window into paper money to avoid the negative interest rates, which is tantamount to a run on the banks.

I expect US citizens who receive stimulus checks that are automatically deposited into their bank accounts may be coerced into the negative interest rate fiasco.

Americans have been saving, not spending.  Pre-COVID-19 consumer spending accounted for 70% of US economic growth.  Saving rather than spending harms the consumer economy.

The Federal Reserve Bank of St. Louis notes (below) that total savings deposits at banks is $10.56 trillion as of Feb. 23, 2021.  The Carlisle Financial Group says an additional $2 trillion has been stashed in deposit accounts since the start of the global pandemic in early 2020, most of it gaining just 0.1% interest in bank savings accounts.

What are the options?

Here are the options for savers once they hear of negative interest rates on their banked money (what government and Wall Street won’t tell you).  Savers may elect to:

Should negative interest rates cause many consumers to spend their banked money, which would help overcome the problem of slow velocity of money, defined as rapidity of the transfer of money from “butcher to baker to candlestick maker,” then the consumer economy would boom!

But inflation may rise with it as retailers may raise prices as demand for goods and services increases.  Even without increased demand, increased COVID-19-related transportation, labor and pandemic compliance costs are forcing retailers to raise prices.

There is a specious argument that as consumer spending rises (demand for goods and services increase), retailers won’t necessarily raise their prices.  Anything is possible.  However, this argument uses the manipulated Consumer Price Index (CPI) to make its flawed point (see charts below).

Inflation IS occurring (using historical measures of inflation, not the reported inflation rate of ~2% — red line in chart below).  Inflation is ~9% (blue line in chart below) according to economist John Williams at ShadowStats.com.  But not run-away inflation (example: Zimbabwe Nov. 2008, hyperinflation of 79600000000%).  At least not yet. 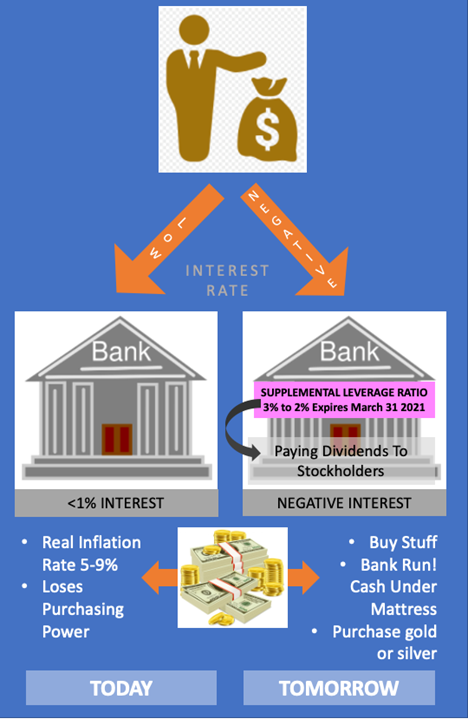 The post What Are You Going To Do With Your Banked Money After March 31st? appeared first on LewRockwell.

Biden Says He Will ‘Defeat the NRA’ While In Office