What Is Behind Saudi’s Shocking Decision To Cut 1MM Bpd In Oil Output Today? Goldman Explains

The first monthly OPEC+ meeting to decide on the group’s production ended with an unexpected, in fact shocking two-month agreement:

Of the three, the Saudi decision to cut production by 1 million barrels came as a shock to the market, sending oil sharply higher.

What has behind it? As Goldman’s commodity strategist Damien Courvalin explains, despite this bullish supply agreement, Saudi’s decision “likely reflects signs of weakening demand as lockdowns return, with our updated 1Q21 balance actually weaker than previously.”

That said, Saudi’s action and the prospect for a tight market in 2Q21, as the rebound in demand stresses the ability to restart production, will likely support prices in coming weeks, leading Goldman to reiterate its bullish oil view. As a result, the bank continues to recommend a long Dec-21 Brent trade (currently trading at $52/bbl vs. its $65/bbl forecast) and expect sustained backwardation and lower implied volatility. Courvalin also notes that “fundamentals do matter, but we see the recent recovery in refining margins and product cracks as premature and the best way to express the expected weakness in near-term oil demand.”

Here are more details from the Goldman note:

The most significant decision was Saudi’s pre-emptive measure to reduce output in the face of renewed lockdowns with OPEC+ production now expected below our prior forecast by 1.45 mb/d in February and 1.85 mb/d in March. Saudi’s decision surprised as global demand beat expectations in December on shallower and shorter EU lockdowns and resilient jet demand. Further, by allowing Russia to increase production, Saudi undermined its efforts since April to have every producer implement similar cuts, with the Kingdom solely taking a fiscal hit. Finally, by lifting prices to their highest levels since last March, Saudis risk extending the ongoing recovery in shale production, as WTI spot prices now at $50/bbl can allow for higher activity and positive free cash flows (although such a response would likely take time to materialize with producers cautious of further OPEC surprises).

This, according to Courvalin, leaves a large expected slowdown in global oil demand as the most rational explanation for Saudi’s cut, likely signaled through its term contract to Asian consumers where infections are rising quickly (Korea, Japan, South-East Asia).

Meanwhile, Goldman’s high-frequency indicator of oil demand (or lack thereof) suggests that the return of more aggressive lockdowns is already weighing on demand, and the bank is reflecting these headwinds in its balance, taking down January and February oil demand to 92.5 mb/d from an upward revised December demand level of 93.5 mb/d.

Separately, and from a geopolitical perspective, the transition to a likely less supportive US administration may also have led Saudi to adopt a more supportive stance towards other Middle East producers, as illustrated in both today’s unilateral cut and restoration of ties with Qatar.

As a result of today’s announcement, Goldman’s updated Q1 2021 balance is weaker than previously although, with prospects for a tighter market in 2Q21 as the Saudi announcement hints. This new OPEC+ path and the bank’s demand downgrade lead the bank to forecast a 1Q21 0.25 mb/d surplus vs. a commensurate deficit previously (only half offset by a tighter December). Importantly, OPEC+ March production level will still be low just as global demand starts rebounding sharply driven by warmer weather and rising vaccinations. This points to the group potentially struggling to ramp-up output quickly enough, with estimates currently reflecting a 1.3 mb/d deficit in April-July despite OPEC+ increasing production by 4 mb/d, a historically tall order. 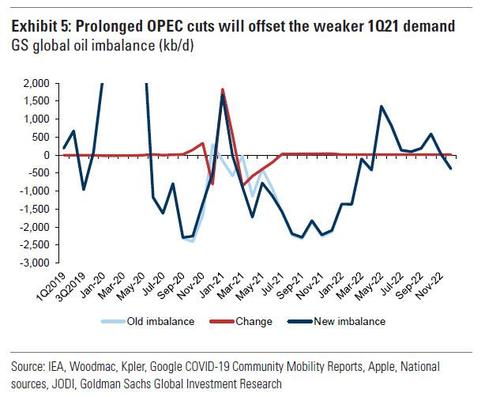 On net, Goldman believes today’s outcome will help support prices in the face of demand risks given Saudi’s commitment to balance the market, and the potential for Saudi to cut more – now that they have tipped their hand – than demand actually disappoints, risks of a tighter 2Q21 balance and a growing consensus bullish outlook for crude fundamentals later this year.

Finally, for those asking, Goldman’s own year-end Brent forecast of $65/bbl is well above market forwards and consensus expectations.

TSA To Slap Mask-Mandate-Violators With $1,500 Fines