China’s Covid-driven export boom continued into December, pushing China’s trade surplus to a record high in the last month of 2020 and further bolstering what is already the world’s best-performing major (mercantilist) economy.

Here are the details from the December data: 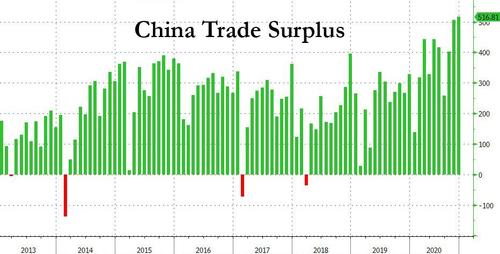 According to Bloomberg China economist David Qu, “the data showed external demand is driving China’s economic recovery, and this will likely continue in the coming months. Exports should jump in the first quarter, partly due to stronger U.S. demand from the expected economic relief package.”

Chinese exports to the U.S. surged 34.5% in December from a year earlier, while imports of American goods rose 47.7%, the most since January 2013. For the full year, the trade surplus with the U.S. was $317 billion, 7% higher than in 2019: not exactly what Trump had in mind when he launched the trade war with Beijing. 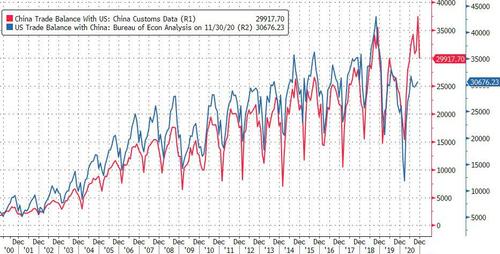 And yes, the surge in Chinese exports to the US was almost entirely on the back of healthcare/covid-related products. So once again, Beijing “lucked out” by releasing the deadliest pandemic since the Spanish Flu.

Li Kuiwen, an official at China’s General Administration of Customs, said the trade surplus may keep growing this year, supported by an expected recovery in the global economy and stable domestic growth.

“The external recovery has continued,” said Chang. “Chinese manufacturers have flexibly adjusted their production lines to produce goods to meet the demand through the new Covid era.” Both pandemic and non-pandemic related goods are growing strongly, she said.

The data probably won’t shift the central bank from its stance of gradually withdrawing monetary stimulus but without any sharp turn in policy, Chang said, adding there’s unlikely to be an interest-rate cut or hike this year.

Some more in depth observations from Goldman on the latest trade data: 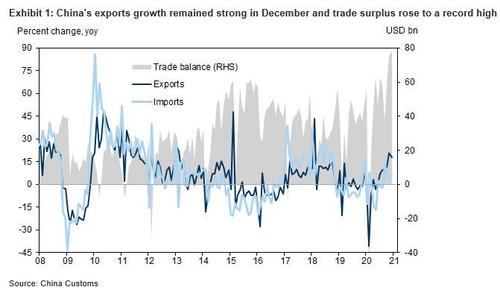 As Bloomberg notes, behind the relentless surge in shipments is insatiable global appetite for work-from-home technology and health care equipment – conveniently, as Covid emerged out of a lab in China – as the coronavirus panbdemic continues to ravage the world. Demand is so strong that’s it’s contributing to a widelye discussed bottleneck at ports as manufacturers complain of a shortage of shipping containers and surging costs.

“Demand for China’s goods may remain strong in the next few months with the recent surge of Covid infections in the U.S. and Europe,” said Ding Shuang, chief economist for Greater China and North Asia at Standard Chartered Plc in Hong Kong.

However, that outperformance will inevitably wane as the virus is controlled in big markets including the U.S. and Europe and industrial production recovers, he added.

The figures also showed shifts in China’s trading partners last year, with the 10-member bloc of Southeast Asian nations rising to the No. 1 spot, followed by the European Union and the U.S. 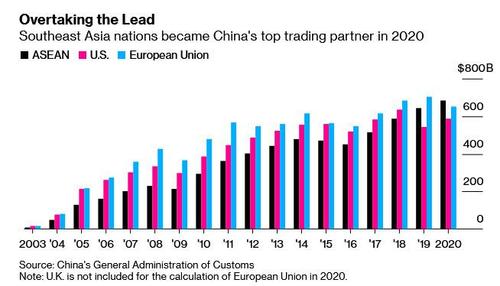 Breaking: British Judge Rules Julian Assange Cannot Be Extradited to the US to Face 18 Counts of Espionage