What’s Behind The Latest Bond Rout, And Where Does It End: BMO Explains

By Ian Lyngen, head of US rates strategy at BMO Capital Markets

Treasuries are under meaningful pressure as the 1.624% yield peak in 10s comes into range. There was no definitive trigger other than the usual suspects of reopening optimism, supply indigestion, and SLR expiration jitters. To this latter concern, the most recent primary dealer holdings data as of March 3rd revealed a record $64.7Bn decline in Treasury holdings to $185.8 bn. It’s worth noting that -$23.5 bn of this was in the bill sector and -$3.7 bn in floating rate notes; that said, notes and bonds were also reduced. However, given the preceding spike in yields and the fact these figures are reported in market value rather than par terms, the drop reflects more than simply dealers aggressively shedding Treasuries as the extension of SLR became less certain. Nonetheless, dealers selling into the downtrade is consistent with the choppy price action seen during the last several weeks and concerns that ballooning net issuance could be problematic for liquidity conditions; particularly in the event the preferential treatment for Treasuries is lost. 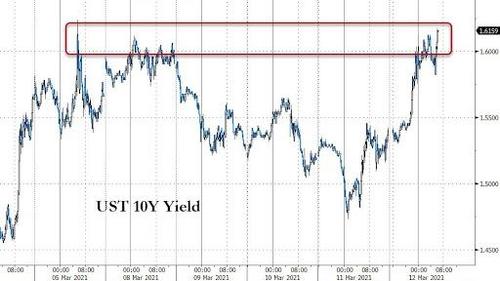 It’s with this backdrop that today’s trading session takes on particular relevance in gauging investor sentiment as the weekend approaches. While last week saw a meaningful challenge to the ‘Friday afternoon bears’ pattern which has been evident throughout much of this year, as we ponder the information on offer, there is little to dissuade the drift higher in yields aside from residual price action in other markets. PPI and the University of Michigan’s confidence figures won’t meaningfully influence the outlook for the recovery and as such we anticipate the reports will be largely ignored in favor of anxiously watching the response in risk assets as the path of least resistance appears toward higher yields as the US comes online.

The lack of any obvious impetus for the overnight weakness suggests there is a large positional and technical component to the move. Given the average auction takedown stats, we’re skeptical this is entirely a classic episode of supply indigestion characterized by dealers shedding bonds in a position-squaring exercise; although there is undoubtedly a component of that at play. As cheaper and steeper remains the ‘it’ trade for 2021, the current selloff is consistent with a market eager to press the price action in an effort trigger a further repricing as an effectively empty data calendar ahead of the Fed (save retail sales) implies the price action itself will once again be the event risk.

From a technical perspective, the line in the sand for Treasuries is best represented at the 10-year yield peak at 1.624%. The tone of trading during the overnight session points to the vulnerability of the top of the yield range and leaves us less convinced the local peaks are in than we might have otherwise been given the comparatively uneventful reopening auction process. Stochastics are once again edging toward oversold territory, although our favored momentum measures remain just shy of the threshold where such extremes would be relevant. On the other hand, DSIs are decidedly oversold; in fact, we need to look back to early 2018 for find a period in which investors were so negative on the outlook for TY and US. While consistent with the supply jitters following the 7-year auction, we’re less convinced the negative sentiment will remain in place for the foreseeable further. The event risk created by the upcoming FOMC meeting remains high, particularly as the divergence between the ECB and Fed has been in focus with the former more worried about elevated real yields than the latter.

Adding to the bond bearishness was the update from Biden on the timing of ‘back to normal’. The President has outlined a path out of the pandemic that would return the US to some semblance of normality by the Fourth of July. The symbolism of Independence Day and the optical end of the pandemic certainly isn’t wasted on us – nice one, Joe. The next 6-8 weeks will be essential in determining just how reasonable such a timeline is in terms of vaccine accessibility and uptake. For now, markets appear to be taking the official guidance at face value.

Not ‘The Onion’: Democrat Ends Prayer With “Amen… And A-Woman”