What’s Going On With Bonds: “Prices Have Changed More Than The Facts”

In what appears to be a backtrack of the recent ECB sentiment on the rise in global rates, European central bankers apparently see ‘no need for drastic action’ to address the situation. At least ‘according to officials familiar with internal discussions’ as BBG so aptly put it. The gist of the argument is that if verbal intervention appears to be sufficient to contain the backup in yields, there will ultimately be no need to follow-through with actual bond-buying. This logic certainly resonates, however the effectiveness of verbal intervention is inextricably linked to the credibility of policymakers and investors’ faith in follow-through. By walking back the recent mantra of concern, the ECB is bringing into question the central bank’s actual reaction-function to such a swift backup in real yields. Investors are operating under the impression that the spread between ‘concern’ and ‘action’ is much narrower than the overnight headlines suggesting no ‘drastic’ action is warranted at this time. We’ll sidestep the credibility and policy error arguments and instead highlight the overnight weakness in Treasuries that saw 10-year yields once again touch 1.45% (before spiking as high as 1.48% ahead of the ADP print). 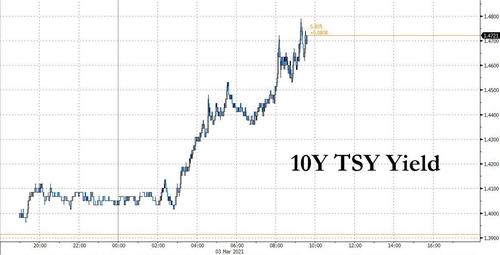 As for the Fed, Brainard’s comments suggesting the repricing is at least on the minds of the Committee – even if the current characterization of higher rates is a ‘positive’ development as it reflects improving growth an inflation outlooks. Much has been said about the current leg of the selloff being driven by growth as opposed to inflation expectations (i.e. real yields increased while breakevens have been steady). This leaves higher rates more vulnerable insofar as historically elevated inflation expectations can persists regardless of the realized data for longer than growth ambitions can diverge from real time economic performance. Alas, the nature and magnitude of stimulus during this particular cycle set the stage for an ‘it’s different this time’ argument – particularly as it relates to the elevated savings rate.

January’s surge in US savings from 13.4% to 20.5% was unquestionably a function of government transfers (i.e. stimulus checks and unemployment benefits). This implies that, as with the previous peak in savings seen during the early stages of the pandemic, savings will drift lower as the reserves are worked through in favor of consumption. With many front-line service sector firms still suffering, millions of displaced workers are effectively living stimulus check to stimulus check as it were. This is by design and the entire purpose the fiscal bailouts are to create a bridge to the new normal for those hardest hit by the pandemic.

This brings up one of the most topical debates among market participants at the moment; is the amount stimulus in system (including the upcoming round from Washington) too much, too little, or just right? Worries about accelerating inflation, bubbles, and the necessity of higher yields implies policymakers have overshot. It’s impossible to know precisely how much stimulus was needed until long after the fact, however the timeline to returning to the new normal is essential in gauging how much bailout funding is needed. Said differently, if covid disappeared tomorrow, then there is too much stimulus; if the economy is still in lockdown on NYE 2022, there is not enough stimulus.

Throughout the last year, as estimates of the length of the journey to a post-pandemic world increased, additional fiscal efforts followed intuitively. With a vaccine now developed and distribution channels established, investors can see the proverbial end of the tunnel – kinda. Conflating access and utilization of the vaccine introduces a degree of cognitive dissonance as we ponder when the US will see mask-free in-person commerce/entertainment. The inoculation process is still early enough that demand outweighs supply; although there will come a point when the chorus from public health officials shift from ‘please wait your turn’ to ‘please don’t forget to get your vaccine’. Whether this occurs before or after state and local governments are comfortable fully reopening will determine the appropriateness of the current level of stimulus. Food for thought following Biden’s announcement that vaccines will be available in the US by the end of May – two months sooner than prior estimates.

Treasuries are very much in a consolidative mode and as such the incoming data holds the potential to sway the balance in either direction. Prices have changed more than the facts, thereby creating a scenario in which the selloff will (eventually) need confirmation from the real economy that elevated optimism is warranted. The first leg of the increase in rates was a function of building inflation expectations that saw 10-year breakevens top out at 226 bp. While still at 221 bp, the second stage of the weakness was a function of improving growth expectations as evidenced by the increase in real yields. This shift not only acts as a modest tightening, but a rosier economic disposition during the age of corona is intrinsically more fragile than prior to 2020.

This increases the market moving potential of not only Friday’s NFP, but also the February ISM services release. The strength in ISM manufacturing was encouraging for the pace of the recovery, even if the ultimate onus will come down to the front-line service sector’s ability increase its contribution to aggregate production. It’s difficult to envision an outcome for the next several months that doesn’t involve elevated breakevens; particularly as inflation expectations can persist and remain disconnected from the realized consumer price pressures for some time. This is arguably the macro space in which the massive amount of stimulus will have the most enduring impact. A more ambitious growth outlook will soon run up against the realities of a flagging labor market.

In the interim, the Chair’s speech on Thursday will unquestionably be a market event. The degree to which the Fed is willing to allow rates to backup and characterize it is a positive has come under scrutiny. We took solace in Brainard’s observation that she is “paying close attention to market developments. Some of those moves last week, and the speed of the moves, caught my eye. I would be concerned if disorderly conditions or of a persistent tightening in financial conditions that could slow progress towards our goal.” We’re certainly not anticipating aggressive signaling from Powell as to the FOMC’s willingness to shift bond purchase further out the curve, although that would be the most logical next step in the event the Fed deems the impact on financial conditions as undesirous.

Brainard’s comments may prove an initial overture toward appeasing investors who are anxious that a sustainably higher rate plateau will ultimately undermine risk asset valuations. The early signs of stock wobbles last week reinforced the relevance of the lower-for-longer mantra from the Fed throughout the pandemic. While the Committee clearly has no intention of taking away the proverbial punchbowl, it also would like to avoid refilling it unless it’s proven absolutely necessary to keep the real economy on course to emerge from the pandemic in the most advantageous possible condition. The market will be looking to Powell for greater clarification sooner, rather than later in this regard.

Microstrategy To Pay Board Members In Bitcoin