Authored by Sarah Anderson via RealClearMarkets.com,

Well-respected dictionaries worldwide recently found themselves at odds with the Democratic party. In this case, the Dems attempted to redefine “infrastructure.” 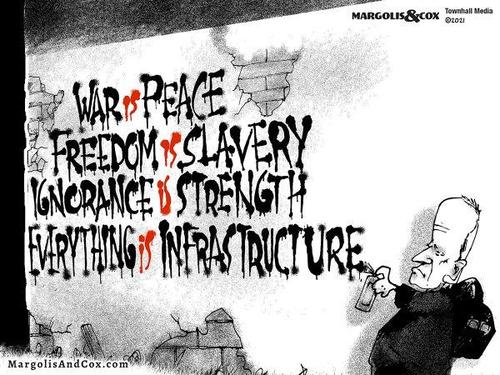 Sound wrong? That’s because it is. The definition of “infrastructure” in the Oxford dictionary reads, “the basic physical and organizational structures and facilities (e.g. buildings, roads, power supplies) needed for the operation of a society or enterprise.” This is a far, far cry from the list of leftist agenda items that are included and touted by members as “infrastructure” in the latest tax-and-spend boondoggle, President Biden’s “American Jobs Plan.”

However, even President Biden himself has come to the defense of those trying to massively expand what “infrastructure” is, saying, “The idea of infrastructure has always evolved to meet the aspirations of the American people and their needs. And it is evolving again today.”

President Biden has been touting this nearly $2.5 trillion “infrastructure” package over the past few weeks, following on the heels of the $1.9 trillion “American Rescue Plan” which was signed into law in the name of COVID-19 relief. The new plan is yet another proposal from the left to spend profligately, completely disregarding the necessity of investment — not spending — in our nation’s prosperity.

Policies centered around investment would grow the private sector, unleashing the brilliance of business leaders and individuals to innovate and create wealth for all Americans. Spending, to the contrary, throws taxpayer money recklessly across the private sector, creating uncertainty at best, and devastating entire sectors of our economy while bankrupting the U.S. at worst.

Unfortunately, with every dollar spent by the federal government, we trend further toward the latter. An additional $2.5 trillion in the “American Jobs Plan” is no exception. What the left fails to do time and time again is distinguish between actual thoughtful investment in our society and useless spending.

Furthermore, as is par for the course these days with the left, the “American Jobs Plan” also takes something historically bipartisan and turns it into a hyperpartisan and grossly misrepresented issue. Just as the recently-enacted “American Rescue Plan” was COVID-19 relief in name only — with only 9 percent of the $1.9 trillion directly related to COVID — so too is the  “American Jobs Plan” very misleading.

Even according to the Washington Post, only about 5 percent of the funding in this plan goes toward what most might reasonably consider infrastructure, based on historical precedent and dictionary definitions: roads and bridges.

There is no question that $100 billion to grow the federal government’s hand in the ongoings of local public schools — including upgrading their kitchens to be “green” — has nothing to do with what common sense and the dictionary would define as “infrastructure.”

The same goes for the $400 billion included in the plan to expand Medicaid and boost the union rolls of healthcare workers. Speaking of big labor and union rolls, the plan also urges the passage of a bill that would ruin the careers of millions of freelancers and independent contractors: the gig-economy-crushing Protecting the Right to Organize (PRO) Act.

Beyond this, it spends hundreds of billions of dollars more across a number of clean energy initiatives in an effort to reach net-zero emissions within the next 30 years. That spending includes $174 billion to expand crony and regressive electric vehicle initiatives and subsidies, and $46 billion to grow federal government buying power to choose winners and losers in our economy.

All of this spending is, of course, used as an excuse from the left to push for a tax hike on the very groups that create wealth in our country, no less. President Biden’s plan would raise the corporate tax rate back up to 28 percent from the 21 percent it was lowered to under the Tax Cuts and Jobs Act in 2017, which would inevitably make us less competitive globally and harm the businesses that create so much prosperity for Americans.

The mental gymnastics required to think of this package as “infrastructure” and convince oneself that it would create individual opportunity is doable only in the minds of leftists, who place little faith in the private sector and enormous faith in the government to run our lives.

It is safe to say that the left’s never-ending mission to expand the welfare state and create all-but-full government dependence is NOT infrastructure. Just consult your dictionary.

Will WallStreetBets Send The VIX Soaring Next? One Bank’s Surprising Answer

Diesel’s Decline One For The Ages: Biggest In Almost 6 Years