When Will The Window Of Euphoria Close?

“The sucker play is always the same: To make easy money. That is why speculation never changes. The appeal is the same: Greed, vanity and laziness. The merchant who would not dream of buying and selling stocking or percales on the advice of fools and cheerfully risks his money on the say-so of men whose interest is not his interest or tipsters who have not grown rich at the game they want him to play.”

– Reminiscences of a Stock Operator

These certainly are interesting times. Despite a global pandemic, the S&P 500 is 5 days removed from all-time highs. 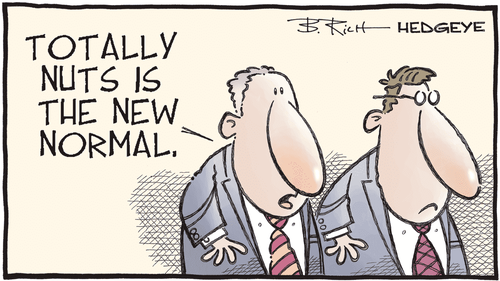 Additionally, there are 20,000 members of the National Guard protecting Washington DC, notably Capitol Hill. That is 4x the amount of US soldiers in Iraq and Afghanistan.

Their purpose is obvious – to protect the nation’s “peaceful” transfer of power from supporters of the outgoing President. Violence is expected throughout the nation next week. While those events are uncomfortable for Americans to contemplate, they have had no effect on the financial markets. Equities remain elevated and bonds have sold off, no haven bid necessary.

Amidst this geopolitical backdrop, this is how the week has progressed.

Monday: A case of mistaken identity sends pink sheet stock Signal Advance skyrocketing. The Monday’s intraday peak was the culmination of more than 12,000% gain in three sessions. Despite being more than 85% below that peak, shares are still 1,800% higher than a week ago.

Tuesday: Small cap Zomedica skyrocketed when Animal Rights activist Carole Baskin talked up the company in a $300 Cameo clip. The company, which is forecast to have $5 million in revenues in 2021, is still worth $570 million at current prices.

Thursday: The madness appeared to break the AAII Sentiment Survey. The results initially showed the survey as 100% bullish, which is a level of optimism never reached before in the survey’s 33 year history. The results were subsequently taken down. AAII has officially stated there are no results for the last week and they could not be tabulated due to a software error. We can’t wait to see what Friday brings.

$10 Trillion of stimulus is a tremendous amount of stimulus to digest. In his futile quest for consumer price inflation, Fed Chairman Jay Powell has created a historic asset bubble that will be the downfall of the US economy.

All investors should note that the market is not as easy as it has appeared. In a business where there are no guarantees, it is a guarantee the environment will get harder. Institutional investors and companies should be on the lookout for the social media cabal looking to run share prices higher and take advantage of that liquidity when it is offered.

This is hardly an environment where informed investors are transacting to establish price discovery. It is simply a story, a theme and a buy order. Please remember there is no such thing as a new economy, there have been technological advances since the beginning of time. Yes, there are technological revolutions, but there are centuries of history of investors overpaying in the near term for the shiny and new. This environment will prove no different.

The charts below of call option activity and total equity volumes reinforce that this is simply a speculative snapshot in time. 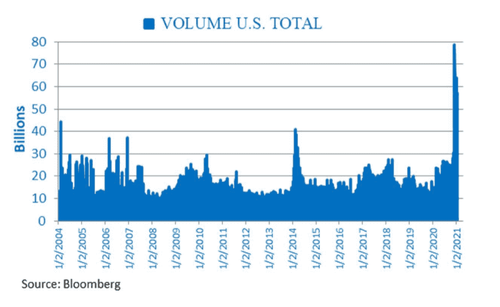 A window of euphoria as a $21 Trillion economy digests $10 Trillion of stimulus. 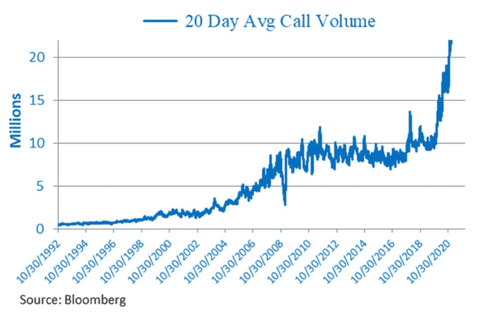 What happens after that? The window should be used for tactical exits and certainly not as entry.

The day will come when this window slams shut, and it is likely to be in the coming months.

The Dumbing Down Of America Is Poised To Accelerate