Where America’s Bridges Are Crumbling

Back in August 2007, the dangerous and decaying state of America’s infrastructure became a shocking reality when the I-35W Mississippi River Bridge in Minneapolis collapsed, sending vehicles crashing into the river below. 13 people were killed while another 145 were injured. In August 2018, a bridge collapse in Genoa, Italy, shocked the world with 43 people losing their lives. After that catastrophe, many countries, including the United States, started to seriously look at the state of their deteriorating infrastructure.

Last week, as Statista’s Niall McCarthy notes, President Biden unveiled his plans for a $2 trillion investment in American infrastructure, describing it as “a once-in-a-generation effort”. It would involve replacing lead piping, rebuilding 20,000 miles of roads and repairing the country’s 10 most economically important bridges. Biden described the program as “unlike anything we have seen or done since we built the interstate highway system and the space race decades ago”. He added that it would be “the largest American jobs investment since World War II”.

After the announcement, a report from the American Road & Transportation Builders Association (ARTBA) illustrated the scale of the challenge in overhauling and repairing U.S. infrastructure by finding that more than 220,000 American bridges need repair work. 45,000 of them were deemed structurally deficient and Americans cross them 171.5 million times daily. At the current rate, it would take more than 40 years to fix all of them and cost an estimated $41.8 billion.

The good news is that the number of structurally deficient bridges has declined for the past five years but that trend has been tempered by more bridges being downgraded from good to fair condition. 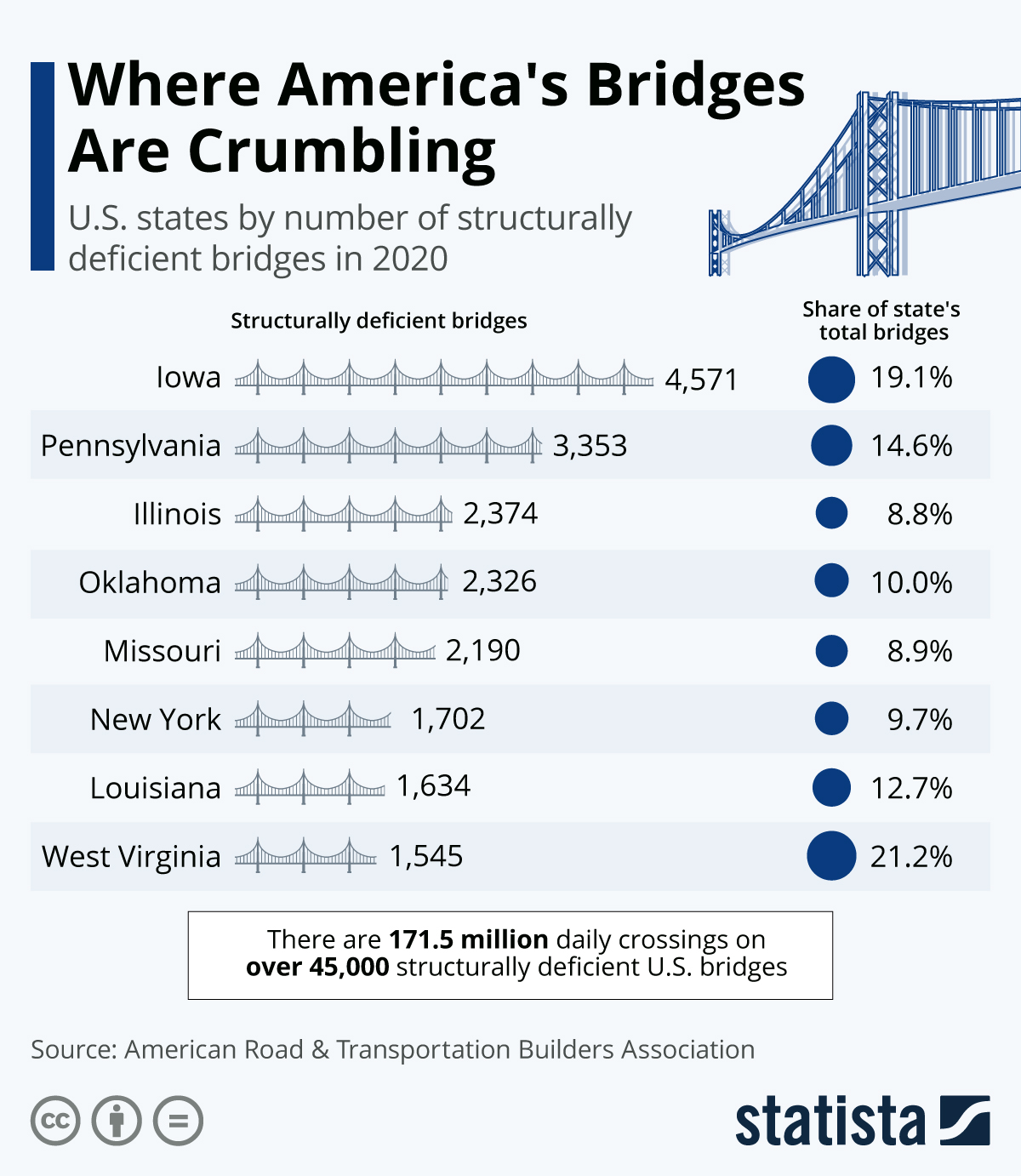 Out of all U.S. states, Iowa has the most structurally deficient bridges, 4,571 or 19.1 percent of its total bridges. Pennsylvania comes second on the list with 3,353 of its bridges falling into the same category, along with 2,374 in Illinois.

West Virginia has the highest share of bridges classified as structurally deficient at 21 percent while Nevada has the lowest at just 1.4 percent.

(FORUM) Did Jeffrey Epstein kill himself?

A Generational Opportunity In Commodities?