WHO Team ‘Tightly Controlled’ By CCP During COVID-19 Origins Investigation

The World Health Organization (WHO)’s probe into the origins of SARS-CoV-2, the virus which causes COVID-19, appears to be nothing more than the media blitz that most skeptics predicted.

According to Reuters, the team’s visit is being “tightly controlled by its Chinese hosts” as they visited a hospital on Saturday in Wuhan which treated early COVID-19 patients.

On its second day after two weeks in quarantine, the team went to Jinyintan Hospital, where doctors had collected samples from patients suffering from an unidentified pneumonia in late 2019.

“Important opportunity to talk directly w/ medics who were on the ground at that critical time fighting COVID!”, team member Peter Daszak said on Twitter.

Team members leaving the hospital did not speak to journalists, who have been kept at a distance since the group left its quarantine hotel on Thursday.

And of course, the team will visit the Wuhan ‘wet’ market tied to the first cluster of cases – except the CCP razed and sanitized the site months ago. Maybe the WHO team can take some memorable photos?

#Wuhan Huanan Seafood Market was claimed to be the origin of #COVID2019 #Coronavirus #CoronavirusOutbreak, although we may never be able to find out, as the market was closed and everything cleaned up on Jan 1. It was said that this market is now going to be demolished. pic.twitter.com/qRDyU0Dweg

The WHO origins probe prominently includes Peter Daszak – president of EcoHealth Alliance, a non-profit group that has received millions of dollars of U.S. taxpayer funding to genetically manipulate coronaviruses with scientists at the Wuhan Institute of Virology. Of note, Daszak drafted a February, 2020 statement in The Lancet on behalf of 27 prominent public health scientists which condemned “conspiracy theories suggesting that COVID-19 does not have a natural origin.” 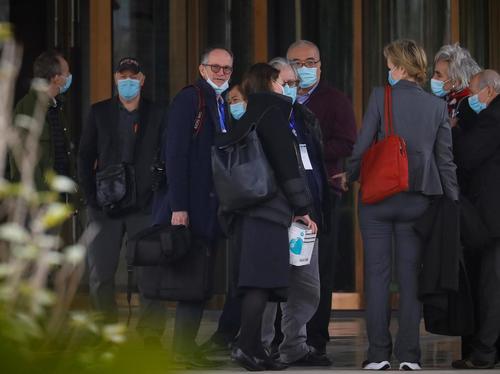 [E]mails obtained via public records requests show that EcoHealth Alliance President Peter Daszak drafted the Lancet statement, and that he intended it to “not be identifiable as coming from any one organization or person” but rather to be seen as “simply a letter from leading scientists”.

Daszak wrote that he wanted “to avoid the appearance of a political statement”.

The 27 authors “strongly condemn[ed] conspiracy theories suggesting that COVID-19 does not have a natural origin,” and reported that scientists from multiple countries “overwhelmingly conclude that this coronavirus originated in wildlife.” The letter included no scientific references to refute a lab-origin theory of the virus.

The emails show how members of EcoHealth Alliance played an early role in framing questions about possible lab origin of SARS-CoV-2 as “crackpot theories that need to be addressed,” as Daszak told The Guardian.

In short, the guy leading the WHO’s faux-investigation was working directly with the Wuhan Institute of Virology’s bat research team, and who insists COVID-19 has a natural origin (and couldn’t possibly have escaped the WIV), has a massive conflict of interest.