Why Inflation Exploded In The 20th Century

The hottest topic in markets at the moment is inflation. For a bit of background our 2018 annual Long-Term Study was entitled “The History (and Future of) Inflation” where we looked at 800 years of data on the topic.

Today’s Chart of the Day from that report shows that in most of our lifetimes we’ve lived through a very inflationary period relative to long-term history even if it hasn’t always felt like that, especially in recent years. Before the start of the twentieth century, prices generally crept higher only very slowly over time and were indeed often flat for very long periods. For example, in the UK the overall price level was broadly unchanged between 1800 and 1938. 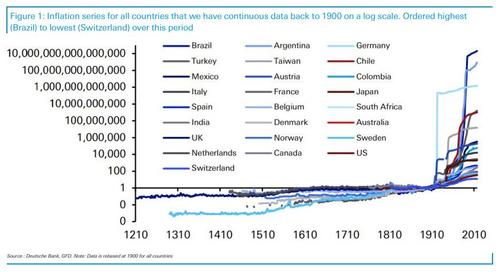 However, inflation moved higher everywhere across the globe at numerous points in the twentieth century. UK prices since 1938 have increased by a multiple of 50 (+4885%) and, of the 25 countries we have continuous inflation data back to 1900, the UK is actually one of only 5 countries in the sample not to experience extreme inflation (if we define it as >25% YoY) in a given year. Of these 25 countries, only Holland (3.0%), Canada (3.0%), the US (3.0%) and Switzerland (2.1%) have seen average annual inflation at 3% or below since 1900.

So what changed in the twentieth century? There was a unique explosion in the global population and we regularly broke ties with precious metal currency systems ahead of abandoning them completely across most of the world from 1971.

Going forward, we won’t have the same population boost (disinflationary), but the working age population in the West plus China will decline which may help labor reclaim lost power (inflationary). Many say technology will offset this. Ultimately though, inflation will likely depend on how aggressive monetary and fiscal policy are and whether they work together consistently. In the post-GFC decade, they worked in opposite directions, but the early signs post-Covid are that they are moving more in the same direction. A fiat currency system allows such an experiment if the policy makers decide to go down that route. All eyes on the US stimulus package(s) and the FED over the coming months and quarters.

Larry Johnson: The CIA Has Become the KGB