There is a simple rule that one needs to understand when examining the plight of conservatives and liberty advocates in history, and it is this:

Conservatives are not allowed to take action to stop the abuses against them. Whenever they do, they are summarily chastised as villains, or their accomplishments are twisted into something that is “shameful”. They are only meant to sit idle like punching bags waiting around for others to take out their frustrations on them.

The protest at the Capitol Building this week was no exception, but before I get to that I need to address a propaganda meme which is making the rounds in the liberty movement right now: The notion that the whole event was “staged”. 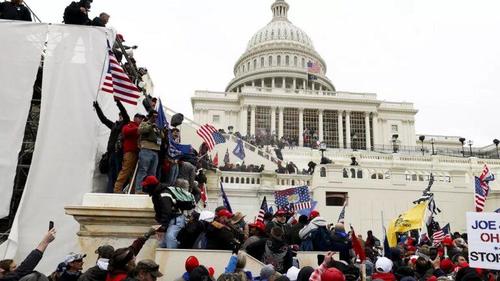 The assertion is that the raid on the Capitol was some kind of theater designed to “make conservatives look bad” as well as “give Congress an excuse to pull back from their opposition of the electoral vote count.”

I have to say that this is a very clever propaganda ploy, as it accomplishes a couple of subtle but important manipulations.

First, by claiming that the storming of the capitol was staged to make conservatives look bad, this impplies that the action is something to be ashamed of.

New Flash, folks! Congress wasn’t going to do jack about the electoral college. They were going to listen to themselves talk for several long hours and accomplish very little. This is what politicians do. It is terribly naive to expect them to do anything else. Concerns about ballot fraud are NEVER going to be addressed by an independent investigation and Congress has no intention of doing anything about this. The very idea that the protest somehow sabotaged the last chance to “stop the steal” is idiotic.

By extension, there is no concrete evidence so far that the raid was staged. None. Police pulling back from the line because of an angry crowd is not evidence. Cops pulled back from angry crowds of BLM protesters all summer long; does that mean this was some kind of elaborate scheme to make BLM look bad? Or, did they just make themselves look bad?

I understand that this assertion taps into the conspiracy brain of the average liberty movement person, but that is kind of the point, isn’t it?

It is not surprising that this type of disinformation campaign is being planted into the greater discussion. As noted, the establishment DOES NOT want conservatives to take action independently, and they know that unlike far-left extremists we actually care about the image of our movement. So we are faced with a two pronged attack:

The mainstream media and the political left accuses conservatives of “shameful” behavior bordering on “terrorism”. At the same time, rumors are spread within the liberty movement that the whole thing was a “false flag”, thereby reinforcing the dishonest claim that the protest was shameful and not something we should be engaged in.

The entire thrust of this psyop is to convince us to never engage in protest action or direct action again, or we might “look bad”.

Frankly, who cares at this point? No matter what we do we are going to be painted as the villains by the media, so the only thing left is direct action. There is only one way the corruption within our own government is going to be stopped, and it’s not through diplomacy or voting.

The election does not matter. Trump does not matter. At least, not in the grand scheme of things. Whoever sits in the White House is irrelevant to the bigger problem at hand; and Trump staying in the White House does not change the fact that conservatives are going to have to unify and aggressively defend our freedoms to change our dysfunctional system and remove influencing globalists from power.

Trump’s own cabinet is LOADED with banking elites, members of the Council on Foreign Relations as well as numerous globalists. Bottlenecking the conservative response and putting all our eggs in the Trump basket is foolish. The raid on the capitol, on the other hand, actually means something.

It sends a message, first and foremost, that we are not going to sit idle anymore; that we are not going to tolerate further government overreach. Conservatives and even moderates are fed up. We have endured numerous trespasses by state governments during the lockdowns. We have lost our businesses and our jobs. For the past year we have witnessed the social justice cult burn down neighborhoods, hijack city streets and loot with impunity while leftists claim they are the “victims”, and now conservatives are being called terrorists because we protest. We have had enough, and the events in Washington are just the beginning of our response.

Rather than being ashamed, we should be proud of what happened. Consider this for a moment – What did the protesters actually do that was so terrible? Stroll into the chambers of congress? How dare they! Some minor property damage? At least they didn’t burn the place down like Antifa would have done. Destroying Nancy Pelosi’s name plaque? That’s just funny.

The media and the political left is acting like these people committed an atrocity against humanity, but they did NOTHING WRONG, and some were shot by law enforcement in the process.

Now, juxtapose the media’s response to the conservative capitol protest getting aggressive to the media response when BLM and Antifa lunatics protested.

Black Lives Matter spent the better part of the past year burning neighborhoods to the ground, destroying private businesses and attacking innocent people in the streets. BLM and Antifa attempted to take over large swaths of Seattle and Portland, declared the areas “autonomous zones”, then started randomly handing out firearms. The media calls it “peaceful protesting” and leftist politicians proclaim the actions righteous and just.

Even now leftists are trying to argue that the BLM and Antifa protests were a model of peaceful action when compared to the events in the capitol.

Does this look peaceful to you:

So, endless violent action is peaceful action when leftists do it, but limited aggression by conservatives is the same as terrorism?

Trump tweeted that conservatives should remain peaceful because we are the party of “law and order”. This is inaccurate and misleading. We do not blindly worship the law or law enforcement, we respect the law as long as it is rooted in our founding principles. What we value is our inherent freedoms and the Bill of Rights, and when these things come under threat it is perfectly justifiable to act, and if peaceful measures don’t work then non-peaceful measures are all that is left.

We don’t have the luxury of caring about the mainstream narrative anymore. The propaganda is telling us to “stay in our lane”, shut up, sit down and watch America be dismantled piece by piece. My rule is, whatever the establishment clearly wants us to do, we should do the opposite. The narrative surrounding the events in the capitol makes it obvious that they do NOT want conservatives to leave their homes and take matters into our own hands. Doing the opposite is the only thing that makes sense.