Why Trust The ‘Experts’?

Authored by Lipton Matthews via The Mises Institute,

It has now become commonplace to accuse anyone who opposes covid lockdowns of being “antiscience.” This sort of treatment persists even when published scientific studies suggest the usual prolockdown narrative is wrong. support the antilockdown position.

There are sociological, economic, and cultural reasons why experts will take the politically popular position, even when the actual scientific evidence is weak or nonexistent.

Experts Are Biased and Are Self-Interested like Everyone Else

Though we are often encouraged to listen to experts because of their intelligence and expertise, there is a strong case for us to be skeptical of their pronouncements.

Beliefs serve a social function by indicating one’s position in society. Hence to preserve their status in elite circles, highly educated experts may subscribe to incorrect positions, since doing do so can confer benefits. Refusing to hold a politically popular viewpoint could damage one’s career. And since upper-class professionals are more invested in acquiring status than working people, we should not expect them to jettison incorrect beliefs in the name of pursuing truth.

Cancel culture has taught us that promoting the world view of the elite is more important than truth to decision makers. 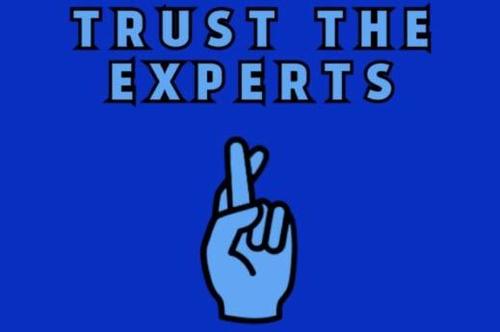 So why should we listen to experts when they give greater primacy to appeasing elites than solving national problems? In contrast to what some would want you to believe—revolting against experts is not an attack on science, considering that little evidence suggests that they care about scientific truth. Let us not fool ourselves. People occupying powerful offices are uninterested in being toppled from positions of influence, and as such, they will seek to minimize views that threaten their professional or intellectual authority. As a result, expecting influential bureaucrats to value truth is unwise. Truth to a bureaucrat is merely the consensus of the intelligentsia at any given time.

Of note is also the lesser ability of intelligent people to identify their own bias. Stemming from their greater levels of cognitive development, it is easier for intelligent people to rationalize nonsense. Justifying extreme assumptions requires a lot of brainpower, so this could possibly explain why highly intelligent people—specifically, people “higher in verbal ability”—are inclined to express more extreme opinions. Our culture has immense faith in expert opinion, although the evidence indicates that such confidence must be tempered by skepticism. Intelligent people, whether they be experts or politicians, do not have a monopoly on rationality.

Admittedly, intelligence may act as a barrier to objective thinking. Brilliant people are adept at forming arguments, therefore even when confronted with compelling data, they are still able to offer equally riveting counterpoints. Smart people can engage opponents without resorting to a bevy of studies to buttress their conclusions. Thus, clearly, the proposals of experts ought to be held to a higher standard primarily because they are smarter than average.

The capacity of an intelligent person to provide coherent arguments in favor of his ideas can be impressive, and may only serve to solidify him or her in his or her conclusions. For instance, in the arena of climate change experts have recommended policies that are consistent with data on nothing but the claim that a consensus supports such proposals. Promoting the wide-scale use of renewables, for example, is usually touted as a sustainable climate strategy despite the fact that studies argue the reverse.

Counter to the rantings of the intelligentsia, we should implore more people to express skepticism of experts. Due to their high intelligence, experts tend to be more inflexible and partisan than other people. This is solid justification for ordinary people to be skeptical of the intellectuals in charge of national affairs. Unlike wealthy bureaucrats, who are insulated from the economic fallout of their bad ideas, the poor usually bear the burden.

The Hunter Biden Show: Why Biden’s Most “Beautiful Thing” May Be Media Collusion