Yesterday in Pittsburgh, Joe Biden proposed the first part of his long-term plan to sustain the economic recovery. As Rabobank’s Philip Marey summarizes (full PDF note here), this first part – the American Jobs Plan – focuses on infrastructure(and care), the second – the American Family Plan –is expected to focus on health care, child care and poverty reduction. The American Jobs Plan amounts to $2.25 trillion in government spending on infrastructure and care for the disabled and the elderly, to be spent in 8 years. It should be fully paid for in the next 15 years. The American Family Plan, which is scheduled to be presented later in April, could add a sizeable amount bringing the total of the two plans to $3-4trillion. As Rabobank previously noted in its American Rescue Plan report, the spending spree of the Democrats only started with the covid relief package signed into law by President Biden on March 11.

First, a little background: what’s in the Plan?

The American Jobs Plan focuses on infrastructure, but also contains a large component aimed at care for the disabled and the elderly. The largest spending item in the American Jobs Plan is transportation ($620 billion). This includes a $174 billion investment in electric vehicles, $115 billion spending on bridges, highways and roads, $85 billion on public transit and $80 billion on passenger and freight trains. However, the plan also supports manufacturing ($300 billion), including $50 billion to support the domestic production of semiconductors and $46 billion for clean energy. The plan also provides money for buildings ($286 billion), including $213 billion for affordable housing, and utilities ($266 billion), including $111 billion for removing lead pipes and improving water system safety and $100 billion for improving the power grid infrastructure. The plan also supports job creation and innovation ($280 billion) through investment in R&D and training. The plan also supports education ($137 billion), including $100 billion for upgrading and building new public schools. In addition to infrastructure spending, the plan includes a large chunk for home-and community-based care for the disabled and the elderly ($400 billion),which should create caregiving jobs for low-skilled job seekers. 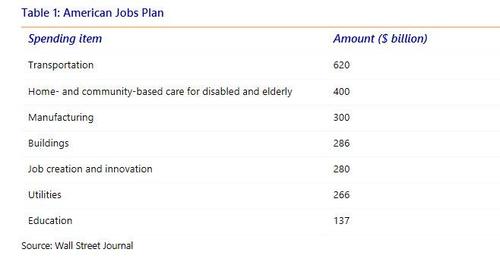 How will the Plan be funded?

To pay for the $2.25 trillion in spending the American Jobs Plan proposes to raise the corporate tax rate to 28% from 21%. In addition, there should be a 21% global minimum tax for corporates, at present it is 10.5%. The deduction for offshoring jobs will be abolished and IRS enforcement against companies will be ramped up. During his Pittsburgh speech Biden pointed out that a middle class couple pays 22% in federal income taxes, while Amazon pays 0%. The American Jobs Plan does not include tax hikes for households. In fact, during his speech Biden repeated his promise not to raise taxes for people making less than $400,000 per year. However, this still leaves room for tax hikes for higher income individuals in the next plan, the American Family Plan.

Besides finding money to pay for new government spending, the Democrats want to raise taxes to reduce inequality. Progressives point to polling data showing that people think companies and wealthy people pay too little in taxes. As Marey notes, “at least the Democrats are still thinking within the boundaries of mainstream thought about fiscal policy where public debt has to be repaid by tax payers. Hence tax hikes.” The alternative, of course, is to invoke MMT and keep spending until inflation gets out of hand. Either way, spending discipline does not seem to be part of the Democratic approach, as Rabo wryly observes.

While there may be some common ground between Democrats and Republicans on infrastructure, for a large part they are thinking about different forms of infrastructure. While Republicans may be willing to spend federal money on highways, bridges and airports, Democrats are thinking of green infrastructure facilitating clean energy and electric vehicles. In early March after Biden had a bipartisan meeting with members of the House of Representatives on infrastructure spending, Republican Representative Sam Graves already said that Republicans won’t support another Green New Deal disguising itself as a transportation bill. In fact, a few moderate Democrats may also be opposed to it. Besides different preferences regarding the type of infrastructure to invest in, finding the funds to invest has been a challenge for decades. Keep in mind that President Trump promised a $1 trillion infrastructure bill during his 2016 campaign., but did not find support for this in Congress. And President Trump was focused on the Republican definition of infrastructure, not the greener Democratic one. What’s more, the Republicans passed the Tax Cuts and Jobs Act in 2017, through budget reconciliation, reducing the corporate tax rate from 35% to 21%. It is very unlikely that four years later they are going to support raising that rate to 28%.

Will The Biden Plan Pass Congress

With two packages and only one more budget reconciliation procedure left in 2021, one package would have to get a supermajority to be passed this year. The most obvious candidate is the infrastructure plan, as both parties may be willing to do something about the outdated infrastructure of the country. However, when Democrats and Republicans talk about infrastructure they think of very different things. Hence in order to get a supermajority it would have to be a traditional infrastructure plan. The greener it gets, the less likely it is to get Republican support. Republican senator John Thune (South Dakota) has already indicated that the Republicans would not support an infrastructure package if Democrats were lining up another package -that Republicans would oppose – to be passed at a later stage through budget reconciliation. In other words, in terms of Republican support, part 2 of the plan makes part 1 less likely or at least smaller in size.

Sure enough, on Wednesday, Mitch McConnell repeated that the infrastructure proposal is a Trojan horse with massive tax increases and more borrowed money. Then on Thursday, Politico reported that Mitch McConnell ruled out all support from Republicans for President Biden’s new infrastructure plan, all but ensuring that the proposal will have to pass with lockstep Democratic unity in the Senate.

Mitch McConnell has ruled out support from Republicans for President Biden’s new infrastructure plan, all but ensuring that the proposal will have to pass with lockstep Democratic unity in the Senate. https://t.co/PzARup25Un

Meanwhile, some Democrats, even progressives, are skeptical of linking complicated tax reforms to straightforward infrastructure spending, fearing it will slow down the process.

Will Democrats Be United Enough?

With McConnell stating that Republicans will not support the Plan, it means that either this plan will have to be slashed down considerably, or the Democrats will have to resort to budget reconciliation to get the plan through Congress. However, this means that this shortcut – which only requires a simple majority in the Senate – will already be used for fiscal year 2022.  Consequently, the Democrats will have to wait for fiscal year 2023 to use the budget reconciliation trick again, or they will have to find bipartisan support for the American Family Plan to pass the Senate. The delay, according to Rabo’s Marey, will further increase the pressure of progressive Democrats on centrist Democrats to eliminate the filibuster in order to get rid of supermajority requirements altogether.

Meanwhile, taking the route of budget reconciliation is not a guarantee for success. In the Senate, the Democrats cannot afford a single dissenter. Centrist Senators such as Joe Manchin and Kyrsten Sinema, who also featured in Rabo’s American Rescue Plan report, may be difficult to keep on board. In other words, while the American Jobs Plan has the potential to unite the Republicans in their opposition to Biden, it will also put tremendous pressure on the internal relations between the left and the right of the Democratic Party.

Latest Round Of COVID Stimulus Checks Boost Savings Rather Than ‘Stonks’

Blain: Optimism Is A Scarce Commodity Across UK

They’re Not Even Trying To Make Sense Now