Will “Go Crazy” Drive The Bear Out Of Hibernation?

Authored by Michael Lebowitz via RealInvestmentAdvice.com,

The economy will “go crazy” this summer. There is not a day that goes by in which we do not hear an economic forecast with an extreme optimism based on pent-up demand.

The argument certainly appears plausible and is widely subscribed to by professionals. To wit, JP Morgan: “we expect consumers to blowout expectations for the rest of the year.” Per Business Insider: “Goldman Sachs raised its forecast for 2021 US gross-domestic-product growth to 6.8% from 6.6%.”

To help put context around whether the economy will “go crazy,” we focus on consumer spending habits during the lockdown and the financial means which drove those habits.

If the “go crazy” scenario is correct, monetary velocity will rise and ignite a powder keg of money supply. Inflation could ramp up beyond levels that comfort the Fed and/or markets.

The optimistic forecast appears, at first blush, good for stocks. We make the case that his thesis may signal springtime for the hibernating bear.

Is There Pent Up Demand?

Before we discuss the elephant bear in the room, let’s consider the merits of the “go crazy” thesis. How might consumer habits change when consumers are free to go anywhere and do anything?

Retail Sales, despite a severe recession, are 6.00% higher than in January of 2020. Is spending “pent-up”? To answer the question, we decompose retail sales into its sector components.

As shown below, the variance in sales changes versus the prior year is significant. Not surprisingly, gas stations, restaurants and bars, and clothes and electronics appliance stores had a tough year.  However, the nine other economic sectors saw improvements in sales versus 2019. The highlighted box points to aggregate changes in Retail Sales. 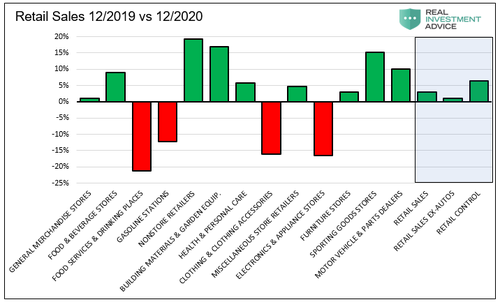 We have little doubt the four sectors with declines will post more robust sales once consumers are comfortable returning to those establishments. There is no doubt; pent-up demand will boost those sectors.

Even if we assume the four sectors witness a pickup in business, can we also presume consumers will continue to spend freely in the sectors they were spending in last year? The questions below provide a few examples to help you answer the question.

The graph below provides perspective for the last question. As shown, sales of building materials and garden supplies are running well above historical norms. With more time to “go crazy,” people will likely have less time to work on their houses and gardens. We think it is highly likely this sector will run below average for some time. 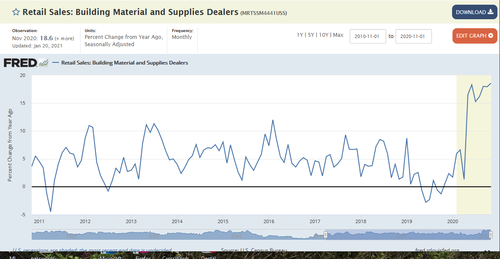 Our spending habits temporarily changed last year, but consumer spending in aggregate rose. Spending anomalies of last year will lead to new irregularities when the economy reopens. However, it’s not clear, in aggregate, there is significant pent-up demand.

To further consider if consumers will “go crazy,” we need to consider their financial means.

Direct checks from the government (transfer payments), forbearance of mortgage, rent, and student loan payments, generous unemployment benefits, and other assistance from the CARES Act significantly boosted incomes and, therefore, the ability to spend. As the chart below shows, transfer payments provided 31% more income than would have been the case without stimulus. 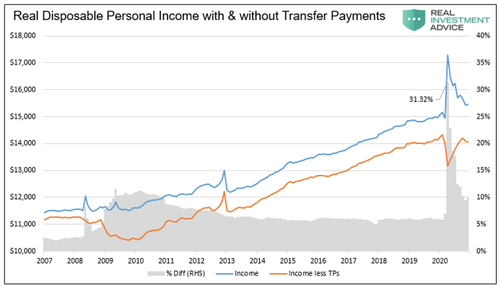 The boost to income is not permanent. As such, real disposable income is gravitating back to its prior trend.

The bounty of stimulus significantly boosted the sales of all kinds of goods and services. Barring more stimulus, consumers will be left to spend within their means.

The currently elevated unemployment rate, historic weekly jobless claimants, and stagnant wages are not supportive of a rash of spending this summer. That said, personal savings have increased, and credit card debt has fallen over the last year. Despite weak income, consumers may spend down savings and increase debt loads to facilitate spending. The caveat being that consumers may continue on their frugal path if they are concerned with their job prospects.

The wildcard in this analysis is the Federal government. More stimulus, especially direct checks to people, will boost consumption. January Retail Sales rose 6% on the back of the latest round of “stimy” checks.

Barring more massive stimulus directly to people, a jump in credit card usage, or a drawdown of savings, it’s hard to make the case that consumers have the means in aggregate to “go crazy.”

We do not rule out the “go crazy” thesis, but it’s not the slam dunk it appears to be either.

The problem with the “go crazy” thesis is inflation. Inflation has been tepid as the velocity of money has fallen sharply, offsetting the surge in the money supply. If consumer spending increases rapidly, monetary velocity will increase, creating inflationary pressures. For more on the interplay of velocity and money supply, please read our article- The Fed’s Inconvenient Truth.

If inflation were to spike due to a surge in economic activity, the pressure on the Fed to reduce QE and potentially discuss higher interest rates will rise.

“We’ve seen 3 decades of lower and more stable inflation.” “As the economy re-opens, we may see a burst of spending,” he says, adding. “Again though, my expectation would be that will be neither large nor sustained.”

A week later, the Fed minutes echoed his sentiment as follows:

If consumers “go crazy,” monetary velocity will increase. Couple that with the continuation of massive monetary stimulus, and you have the ingredients for inflation. Whether said inflation is temporary or not is far from certain. What is likely more certain is that the bond markets will not be pleased.

Bond yields have been rising consistently since August 2020. While yields are still very low, they are approaching levels that are becoming concerning to the equity markets.

Since the Fed came in with bazookas blazing in March of 2020, equity markets have surged higher. In its wake are corporate earnings and economic growth, which have a lot to be desired. In other words, stock market gains are not supported by fundamentals. Excessive liquidity supports prices.

Regardless of whether the Fed reacts to inflation or not, the markets will grow increasingly uncomfortable with inflation. As such, expectations for the Fed to reduce QE will increase. And the justification for current stock prices will erode.

For a market riding high on the back of excessive monetary policy, a “go crazy” situation might awaken the hibernating bear.

As they say, be careful what you wish for. If consumers unleash inflationary pressures and more robust economic growth, monetary policy or even expectations for monetary policy will change.

The seemingly omnipotent Fed may find themselves cornered by rising interest rates, rising inflation expectations, and falling asset prices. They may have no option but to reverse the stimulus.

Given the current egregious level of equity valuations, all investors should think deeply about what it would take for the Fed to take their foot off the monetary gas pedal. “Go crazy” might be the rationale.

How Close Is The UK To ‘Herd Immunity’?

(WATCH) “Get Out!” Diners shout Covid health inspectors out of a restaurant