With every passing day, expectations rise that Biden’s fiscal stimulus will get ever closer to its proposed $1.9 target, sparking a heated debate among even such “progressive” establishment economists as Larry Summer and Olivier Blanchard on one side who warn that Biden’s stimulus will lead to economic overheating, while other economists such as Janet Yellen and Jerome Powell are confident that even more can and should be done.

Stepping back from clueless economists making loud noises in a desperate push to be noticed, whereas a month ago most Wall Street firms expected the latest and greatest covid deal to be around $1 trillion (JPMorgan was at $900BN just three weeks ago), and well below Biden’s stated target, it has since risen substantially, and in some cases – like Toronto Dominion – strategists expect that the full $1.9 trillion amount will be passed. 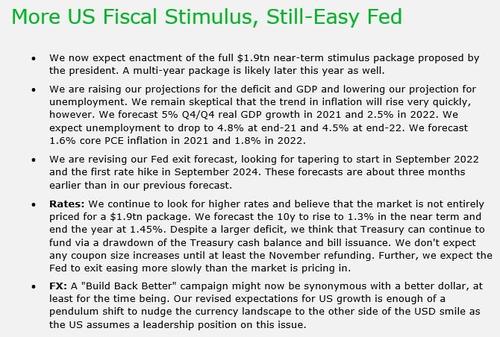 But what do actual market participants think?

To answer that question, Deutsche Bank polled over 450 market participants for their expectations for the upcoming stimulus. It found that expectations for the upcoming US stimulus are high to quite hit with 68% thinking it will come in above $1.3TN and 35% thinking above $1.6TN (another 6% thought it would be more than $1.9TN – normally they would be considered insane, but in this crazy world who knows…) 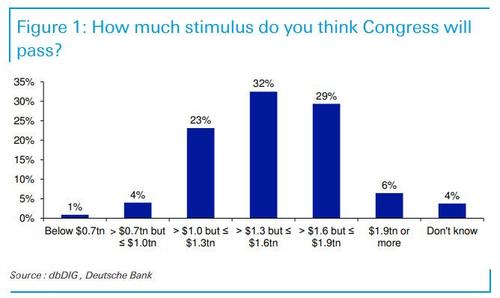 In terms of whether people think the risk is doing too much or too little, the former edges it 51% to 44%. 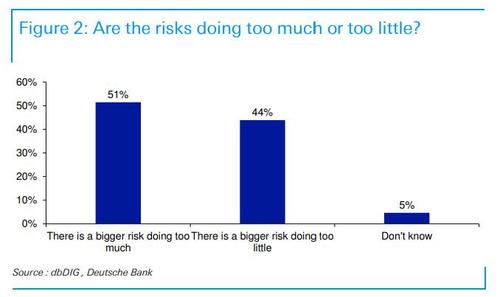 To put this question in the proper context, Morgan Stanley’s top global economist Chetan Ahya made some calculations yesterday and came up with the following stunning conclusion of just how big the Biden stimulus is:

While any counter-cyclical policy response should be sizeable enough to fill the output hole, this time around, policy-makers have done much more. Cumulatively, the Covid-19 recession has cost US households US$400 billion in income, but they have already received more than US$1 trillion in transfers (even before the late December and forthcoming rounds of stimulus). Households have already accumulated US$1.5 trillion in excess saving, which is set to rise to US$2 trillion (9.5% of GDP) by early March once the additional fiscal package is enacted. These policy-making regime shifts also mean that policy-makers will tighten much later in the recovery than in the previous cycle.

The speed and strength of the demand recovery will put a strain on the supply side, which has limited time to respond, and accelerated labor market restructuring will likely push the natural rate of unemployment higher in the near term. Against this backdrop, inflationary pressures will build up very quickly.

So, as DB’s Jim Reid writes, “the debate is relatively balanced but generally respondents think it will be an aggressive package and slightly worry it will be too big” and Reid suspects that overheating remains the biggest Wall Street concern. This is reflected in the fact that those that expect inflation post Covid has climbed for the 8th successive month.