Willful Blindness, Societal Rift, & The Death Of The Dollar

Authored by Michael Lebowitz via RealInvestmentAdvice.com,

“It was assumed, even only a decade ago, that the Fed could not just print money with abandon. It was assumed that the government could not rack up huge debt without spurring inflation and crippling debt payment costs. Both of these concerns have been thrown out the window by large numbers of thinkers. We’ve seen years of high debt and loose monetary policy, but inflation has not come.

So the restraints have been cast aside.”

Regardless of whether you agree or disagree with David’s politics, he makes an incredibly bold statement above. In no uncertain terms, he argues, massive amounts of monetary and fiscal stimulus can be employed with no consequences, no restraints.

We fear this naïve mindset is not just David Brook’s, but a rapidly growing school of thought among economists, politicians, and central bankers.  We all want unicorn-like solutions to what ails us, but the truth, grounded in history, is there is no such thing as a free lunch.

Since David shrugs off any consequences of aggressive monetary and fiscal policy, we bring them to the forefront.

Who Is Funding Stimulus?

Someone must pay for rampant Federal spending.

Ask your spouse, neighbor, or friend who that might be, and they are likely to tell you the taxpayer is on the hook. To some degree, they are correct but increasingly less so.

Since 1980 there have only been two years with federal surpluses. The government spent more than it received in tax receipts in 38 of the last 40 years. In other words, the government must borrow to supplement taxes to pay the bills.

Since 2017, taxpayers have paid for less than half of government expenditures. Over the last six months, as shown below, that percentage has fallen to less than a third. 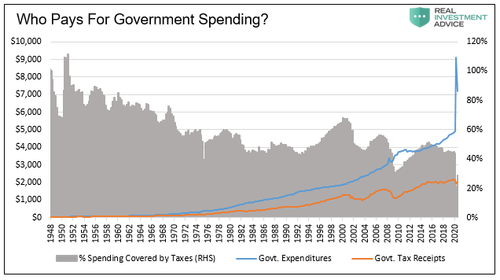 Treasury bond investors are increasingly on the hook for the growing funding deficits. This scheme is possible because the Federal Reserve progressively employs easier monetary policy to assure interest rates stay abnormally low. The intention is not only to minimize the government’s interest expense but generate inflation. Inflation shrinks the real cost of the debt. An added benefit is to boost financial asset prices.

The government’s interest expense is now less than 8% of total expenditures. That is the lowest percentage since at least 1947. Now contemplate the following:

Manipulating interest rates to allow the proliferation of debt comes at a steep cost.

The wealthy tend to consume a relatively small percentage of their wealth. As such, inflation is not a big concern for them. On the other hand, low-interest rates and rising asset prices benefit the large percentage of wealth they don’t spend.  Per the Federal Reserve, the top 1% of Americans own 52.75% of corporate equities and mutual funds.

The poor frequently spend their entire paychecks and, at times, any sparse savings on consumption. Inflation, even when it’s low, reduces the purchasing power of their earnings. Other than small retirement plan savings, in some cases, the poor receive little to no benefit from rising asset prices but they do pay for inflation.

We explained in detail the Fed’s role in widening the wealth gap in our article Two Percent for the One Percent. The article’s summary started as follows:

“The central banking scheme of supporting economic growth through increasing levels of debt only makes sense if “growth at all cost” uniformly benefits all citizens, but it does not. There is a big difference between growth and prosperity. Furthermore, an inflationary policy that aims to minimize the burden of debt while at the same time aggravating the growth of those burdens is taking a serious toll on global economic and social stability.”

The Consequence: Fear of Dollars

As if rising wealth inequality and social rift are not costs worthy of economists’ considerations, there is another problem with reckless monetary policy that is just starting to rear its ugly head. People are increasingly looking for ways to protect their wealth. They are looking to divest from the dollar.

“These seemingly singular events were all connected, part of a series of manias that have gripped the financial world. For months, professional and everyday investors have pushed up the prices of stocks and real estate. Now the frenzy has spilled over into the riskiest — and in some cases, wackiest — assets, including digital ephemera and media, cryptocurrencies, collectibles like trading cards and even sneakers.”

She specifically mentions a piece of digital art by Beeple, which sold as a Non-Fungible Token (NFT) for $69.3 million.

“With NFTs, the hysteria escalated quickly. Last month, an NFT GIF of Nyan Cat, which shows an animated flying cat with a Pop-Tart body, sold for roughly $580,000. Other artists, including Grimes and Steve Aoki, began reaping millions of dollars from their digital artwork. Then on Thursday, Beeple, whose real name is Mike Winkelmann, sold his “Everydays — The First 5000 Days” NFT for a stunning $69.3 million.”

Her article highlights exorbitant prices being paid in fringe asset classes. It’s not just GIFs of flying cats and other “wacky” assets sucking in money; it’s hard assets like land and real-estate.  The graph below shows the urgency of some home buyers. In December, over 60% of home buyers bid for a house without seeing it in person. 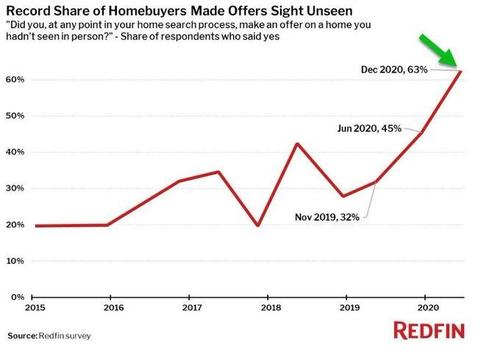 Fiat money, such as U.S. dollars, are worthless pieces of paper. Their value comes from individuals’ trust in the ability for the dollar to retain value over time. Recent trends in digital assets, real estate, and other assets are clear signs that some people believe the dollar’s value is eroding. They would rather own something else, anything else.

Thoughtless monetary policy is sold to the public in the name of the greater good. What these purveyors of deceit fail to expand on is whose greater good. The graph below shares a recent quote from Jerome Powell in which he indirectly claims each successive economic recovery has been stronger than the prior one. He implies that monetary and fiscal actions to arrest slower economic growth results in stronger future economic growth.

As shown in the graph, his statement is patently false. 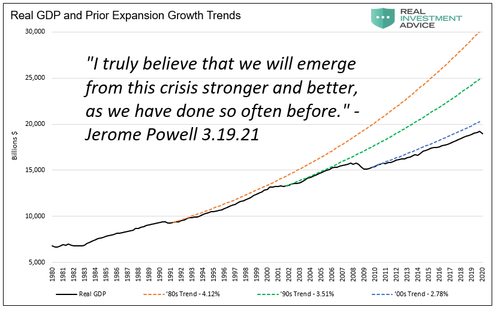 Ignoring history and logic may be expedient but it only aggravates our societal and economic problems.

GME Gamma Squeeze Round 2: Here’s What Happened (& What Happens Next)