Tens of millions of Americans in Mid-Atlantic and Northeast states were blanketed with more snow in one setting than the 2019-2020 season.

The major winter storm dumped more than three feet in some parts of New York and Pennsylvania, led to airport delays, power outages, and travel disruptions.

By Thursday morning, many looked out their windows and saw a winter wonderland, just in time for Christmas next week. Others woke up this morning and saw utter hell, like those in New York cities of Binghamton and Endicott and Litchfield, Pennsylvania, who received upwards of 40 inches.

The National Weather Service (NWS) said about 10 inches of snow and sleet covered New York City, exceeding the measly 5 inches recorded in all of 2019-2020 season.

Boston could receive around a foot of snow, with the heaviest around Thursday morning, Torry Gaucher, a meteorologist with NWS, told NBC News.

By Wednesday night, parts of central Pennsylvania received upwards of a foot. The NWS in State College measured 12.5 inches at its office around midnight and said that it almost surpassed the 13.5 inches recorded in all of last year.

“Snowfall reports received as of 8:30 am. An intense snow band set up overnight around the Binghamton NY area, producing snowfall rates of 4-5″ per hour. Among the highest snowfall totals thus far: Newark Valley NY 44″, Litchfield PA 43″, and Binghamton NY and Vestal NY 41″.” 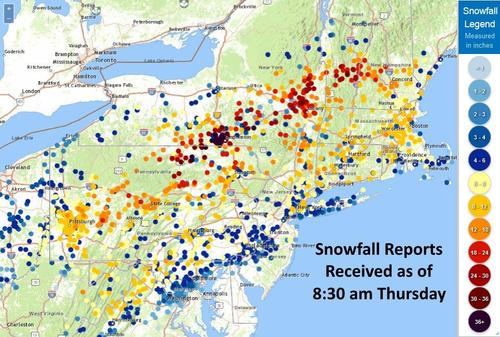 Social media was full of media content from users showing just how incredible this early season storm was for the Northeast.

A Twitter user in Binghamton, New York, tweeted that per hour snowfall was in the range of 4-6 inches.

Binghamton via Snapmaps, just incredible stuff and still coming down at 4-6” per hour. #nywx pic.twitter.com/eAMLkTlm6g

“Could be one of the biggest snowfalls in history in this area,” another Twitter user said.

Could be one of the biggest snowfalls in history in this area. #NYwx https://t.co/l18pbFSwmC

Here’s a time-lapse of the snow near Binghamton.

Boston may get more snow than all of last season.

❄️ Boston TOTAL snowfall for the 2019/2020 season? 15.8″
The #FirstAlert @NBC10Boston forecast for event total snowfall: 12-18″. Yes, THIS storm might bring us more snow than we saw last season! pic.twitter.com/j1aO5JFXRi

No go in Owego…! pic.twitter.com/mLPWL7ttgY

On Monday, Tesla Will Join The S&P500: Here’s What Happens Next

Looking To Escape The City? Here are America’s Most Affordable Suburbs