One of the remarkable stories of 2020 – and even more so 2021 – one which has sparked many comparisons to 2007 just before the credit/housing bubble popped, has been the record surge of blank-check, or SPAC, issuance where investors – at a loss what to invest in – hand their money to a marquee investor who promises to find an appropriate investment over a given period of time or refund the money.

We first discussed the threat of the SPAC bubble back in December, around the time some wondered if the good times may be ending: in an interview with Bloomberg last month, Olympia McNerney, Goldman’s head of U.S. special purpose acquisition companies, described the U.S. SPAC market as being “perhaps too frenzied” and predicted volumes will become more “rational: as fund managers deal with what she described as indigestion.

In retrospect, the good times were only getting started. As Goldman’s Ben Snider wrote over the weekend, so far in 2021, 144 SPACs have gone public — averaging roughly five per trading day — raising a total of $44 billion. Just seven weeks into the year, this represents more than half the totals in 2020, which itself witnessed a 5x increase in SPAC activity relative to 2019. The good news is that unlike historically, when SPACs tended to underperform the market, the median of the 15 most popular SPACs has returned 8% YTD, with some generating much stronger returns and only one delivering a modestly negative YTD return. 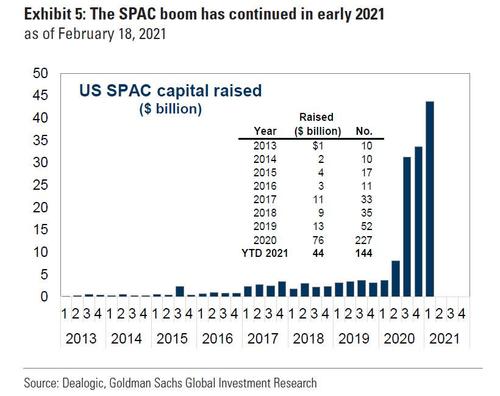 It gets crazier: according to Bloomberg, Ssecial purpose acquisition companies are entering the most bullish stage of their lifecycle in record numbers this month. A surge of mergers by these firms is creating an unprecedented number of buying opportunities amid stagnation in the broader market. The number of acquisitions announced by SPACs has spiked to 48 so far in February, the most since at least 2008 and nearly doubling the prior high of 26 in October. These deals now enter a so-called sweet spot for SPAC traders looking to outpace a muted stretch in the major indices

Of course, this frenzied pace of new issuance is unsustainable, however any warnings that this latest euphoria will end in tears are clearly futile at this point, so we decided to give the microphone to Matt Taibbi who in his latest substack note, dissects the SPAC phenomenon in a way only Taibbi can.

SPAC (n) acronym for Special Purpose Acquisition Company: a way to pay millions today, for the exciting investment idea someone promises to have tomorrow.

After the dot-com bubble exploded, Americans were forced to take a master class in the initial public offering, or IPO. When Enron blew up, we sifted through Special Purpose Vehicles (SPVs) found in the wreckage. With the 2008 crash, the job was finding ways to explain Collateralized Debt Obligations, Credit Default Swaps, and other acronymic nightmares, under cover of which a fair portion of the world’s wealth vanished.

In the Fed-fueled Covid-19 economy, there’s one acronym worth knowing now, in case of bust later: the SPAC, or Special Purpose Acquisition Company.

The SPAC is an IPO-for-IPOs. In essence, it’s a shell company, put together for the express purpose of raising money to acquire private companies that will eventually be taken public. Pick any absurd empty-package metaphor, and it’ll probably fit: investing in the plate one picks up on the way to a salad bar, in the tortilla you’ve been told will eventually contain the world’s best burrito, in the plain white paper and finger-paints you hope to dump in the crib of the next Rembrandt, etc.

Often called “Blank Check Companies,” the SPAC isn’t all new, but the mania has reached once-unimaginable heights. In 2021 already, 160 SPACs have raised over $50 billion, nearly matching last year’s record of $83.4 billion. An increasingly common element in SPAC announcements is the name of a celebrity, who’s enlisted to join a group that announces a plan to raise a massive sum of money for… something. It could be anyone, from A-Rod (asking for $540 million), Shaq (twice asked for $300 million), Grammy winner Ciara ($200 million), etc., etc.

The SPAC’s cash requests are often wrapped in altruistic verbiage, an example being former NFL quarterback Colin Kaepernick joining Phoenix Suns part-owner Jahm Najafi to form Mission Advancement. The group believes “purchasing decisions can act as instruments of change,” and therefore wants to build brands to create “meaningful financial and societal value.” In their SEC filing, they figure this will only cost $287 million: 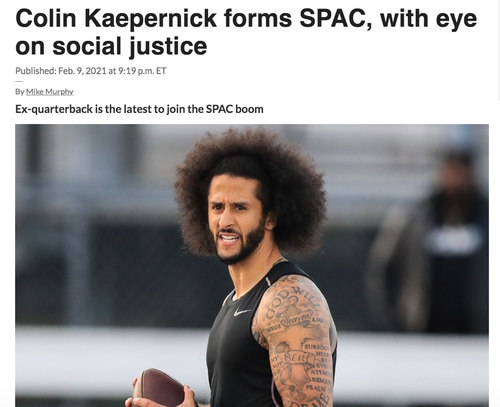 On the opposite political end lay former House Speaker Paul Ryan’s Executive Network Partnering Corporation, launched last August. Reports humorously noted that Ryan and his partner, Solamere Capital founder Alex Dunn, had “not selected a target industry” for their SPAC, which essentially meant they were asking for $300 million without knowing what for yet. The SEC filing for ENPC was inspired vagueness:

If you invest in a SPAC, your money goes in an interest-bearing account that can only be used to acquire properties or be returned to you, should the SPAC management team (called “sponsors”) fail to acquire properties in the allotted time, usually 18 to 24 months. Sponsors are paid in “founder shares,” bought at a discount and usually amounting to 20% of the common stock of the future company, a nice relatively risk-free chunk of change framed as the sponsors’ reward for not paying themselves exorbitant salaries during the brief shopping period.

In the nineties, investors jumped en masse into a tulipomania of stock-buying in companies that in many cases were little more than loose business plans scrawled on the backs of napkins. Crowds poured billions into names like Webvan, eToys, and DrKoop.com, which often barely had income, let alone profits.

The SPAC boom takes the last IPO bubble and moves the speculative mania back a regulatory step or two, allowing money to be raised before any irritating disclosures have to be made about any concrete business plans. After all, the businesses don’t exist yet. When you invest in a SPAC, you’re investing in the reputations of its sponsors, i.e. names, not businesses.

Although the money hasn’t abated, investors are said finally to be grumbling over the lusciousness of the arrangement for SPAC directors. As Yahoo! noted, the “intense competition for deals is beginning to erode returns,” triggering a “backlash from some investors over what they say has become a ‘get-super-rich-quick’ scheme.” Of course, they say that like it’s a bad thing. What’s not to admire, about a country that sells ideas it doesn’t even have yet?

Macro Risks To The Stock Market Are Mounting