I am sorry. There is a kind of free market conservative – John Tamny comes to mind – that somehow thinks the massive fiscal and monetary insanity emanating from Washington happens in a vacuum; and that as lamentable as it may be, it doesn’t gainsay the brilliant works of today’s corporate titans in Silicon Valley and elsewhere.

So never fear. Capitalist dynamism will out. Boom times lies ahead regardless of the trolls and grifters who occupy the nation’s seats of power and the endless cockamamie schemes and assaults on the free market they generate.

Alas, we beg to differ. Profoundly.

By and large these new titans are not geniuses. They are bubble riders who were in the right place at the right time. And after years of the Fed’s massive inflation of financial asset prices they have become totally corrupted – politically, intellectually and otherwise.

We were put in mind of this baleful reality by today’s headline announcing that Jeff Bezos is four-square behind Sleepy Joe’s Infrastructure Abomination, including its massive tax hikes.

“We recognize this investment will require concessions from all sides – both on the specifics of what’s included as well as how it gets paid for,” Mr. Bezos wrote. He said Amazon was “supportive of a rise in the corporate tax rate” and said the company looked forward to seeing the US government’s progress on the plan.

We could say this is just another incarnation of Vladimir Lenin’s famous quip that capitalists will gladly manufacture the rope to hang them with. But actually, it goes much deeper.

These people have been made so insanely rich by the Fed’s egregious stock market inflation that they no longer care if their businesses are inconvenienced or even deeply harmed by schemes like the Biden Boondoggle; and, worse still, have no idea about how real, sustainable wealth is generated or that free market prosperity is not at all a sure thing when the state becomes an unhinged wrecker of honest money, fiscal rectitude and financial discipline.

In the case of Bezos, the chart below tells you all you need to know. At the end of 2015 just five years ago, the company’s market cap stood at $315 billion, making Bezos fabulously wealthy with a net worth of about $45 billion. Five years and the most costly divorce in the history of the planet later, Bezos’ holdings are worth $175 billion.

Needless to say, five years ago Amazon was already absurdly valued at 47X the company’s modest free cash flow. That is, on $107 billion of sales, it only brought $6.7 billion to the bottom line (operating free cash flow) owing to massive levels of CapEx, marketing and operational spending.

The chart below leaves no doubt about what has happened since then. The company’s market cap has soared to $1.627 trillion or by 5.2X. By contrast, operating free cash flow has only risen by 3.9X.

Consequently, the company’s free cash flow multiple has erupted to an otherworldly 63X.

And we do mean otherworldly. Amazon is a 30 year-old company that is coming off the Covid year of the perfect storm for a monster e-Commerce retailer.

A Covid-Lockdown stricken population cowering in their homes ordered front-door delivery of goods and supplies like no-time in the history of mankind. Net sales during 2020 actually rose by the incredible sum of $106 billion.

Let’s put that in perspective. That one-year gain exceeds the total sales of the nation’s second largest retailer, Target Corp.

That’s right. With 1,897 stores occupying 250 million square feet of selling space, Target posted total sales in 2020 of $93.5 billion, and it had taken the company more than a half-century to achieve a sales level well less than Amazon’s one-year gain during the pandemic.

Still, no one in their right mind could expect 2020’s brobdingnagian sales growth to continue. A vaccinated public has had enough of cardboard boxes on their front door steps and is more than ready to break Covid jail for the malls and other retail emporiums.

So to value a $386 billion sales behemoth at 63X a once-in-hundred years’ flood-tide level of free cash flow is just downright lunatic.

On the other hand, with $24.2 billion of pre-tax income in 2020 and an infinitely speculative and gullible stock market, Bezos apparently figures that throwing the rest of corporate America under the tax bus is worth the protection it might buy Amazon from the Washington lifers who run the White House and keep Sleepy Joe on script. 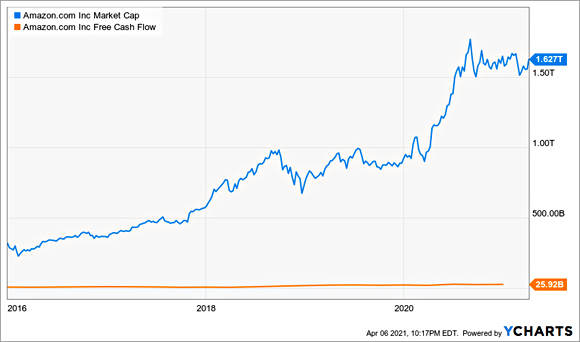 Even then, that’s not all. Amazon is not merely absurdly overvalued. It’s also an unhinged menace on the economic highways and bi-ways of main street America.

Yes, we get the bit about Amazon being a boon to consumers. But low costs earned in the marketplace based on a reasonable return on capital is one thing; predatory pricing without regard to profit in order to simply conquer new market segments is something altogether different. .

In a word, the latter doesn’t happen for long on an honest free market because predatory loss-makers soon run out of access to investment capital. And without capital to subsidize losses, the predator’s business model leads to failure.

As it happens, the Fed and the Wall Street casino it has fostered have made predatory capitalism viable in violation of all the laws of economics. That is to say, Amazon’s e-Commerce business is so ridiculously overvalued that it is actually paying Bezos and his minions to dissipate free cash flow on loss-making ventures of every shape and size.

This truth is obscured by the fact that Amazon’s meager profitability from its core e-Commerce business is supplemented massively by its wholly unrelated cloud services business called AWS. Thus, during the record e-Commerce year of 2020, AWS still accounted for nearly 60% of Amazon’s operating profit based on just 11.7% of its total sales.

Stated differently, Amazon’s operating margin at AWS was 29.4% versus just 2.7% on its giant e-Commerce business, which posted $340.7 billion or 89% of its total sales.

At the bottom line, therefore, AWS earned net income of approximately $12.6 billion. If you were to value AWS at Microsoft’s PE multiple of 37X, it’s standalone market cap would be about $470 billion.

And that’s more than fair. During the last three year’s Microsoft’s operating income has soared from $4.1 billion (2017) to $22.9 billion (2020) or by 5.6X on the strength of the belated takeoff of its cloud business.

At the same time, Amazon is currently valued at $1.662 trillion in the stock market, which implies the e-Commerce business (including advertising) is worth $1.154 trillion.

Then again, the net income attributable to its giant e-Commerce business in 2020 was just $8.73 billion, meaning that it is implicitly valued at a 132X PE multiple!

That’s truly out of this world because Amazon’s 2020 Covid-fueled e-Commerce earnings were wholly aberrant based on its massive $96 billion volume gain in the segment. By contrast the e-Commerce segment’s net income was only half of 2020’s level in 2019 and 2018 ($4.2 billion and $4.0 billion, respectively).

In short, the effect of massive over-valuation in the Wall Street casino is that Amazon’s management is being given seriously erroneous signals. During the last five years it has not paid a dime of dividends or bought back a single share of stock despite generating nearly $172 billion of cash flow from operations and $300 billion of gross profits.

What this means is that Amazon is using these enormous flows to flood the marketplace with below cost pricing and loss-making ventures in endless new segments, while pleasuring Bezos and its public stockholders with an endlessly rising share price and increasingly hideous valuation multiples.

As we have often observed, there is no more dangerous combination than free money and free markets. Together they have turned a once and former Schumpeterian entrepreneur into a hideously rich destroyer of main street wealth, even as he offers Sleepy Joe the rope with which to strangle what remains of sustainable capitalist prosperity in America.

At the moment, of course, conservatives and Republicans are bewailing the embrace by Bezos and his corporate ilk to what amounts to the state religion of wokedom – with the latest examples being the MLB’s exit from Atlanta and the Delta Airlines and Coca-Cola attacks on Georgia’s voting reform law.

But do they suppose that after a near death experience in 2020 and $12.4 billion of losses that Delta Airlines would today be trading at a near record market cap of $32 billion had not the Fed flooded the market with fiat credit?

Or that after 10 straight years of negative net income growth, Coca-Cola Co. would be trading at nearly 30X net income?

Indeed, the chart below tells you all you need to know. Thanks to the mad money-printers in the Eccles Building, Coca-Cola’s market cap has soared from $150 billion to $229 billion during the last 10 years, even as it’s net income has plunged from $12.5 billion to $7.7 billion or by nearly 40%.

At the end of the day, Coca-Cola’s now very woke executives got very rich, but not because of the company’s miserable performance. They got rich and woke because the Fed made it so, fueling a rampant gambling casino on Wall Street that took the company’s PE from 12X in 2011, which it barely deserved, to nearly 30X today, which is a pure crime upon honest finance.

Still, are the Republicans prescient enough to see that their real enemy is the central bankers who have enabled these wokester capitalists to become so unspeakably rich that they no longer even need to pay attention to business or challenge the Washington politicians who threaten it?

The answer, unfortunately, is no. 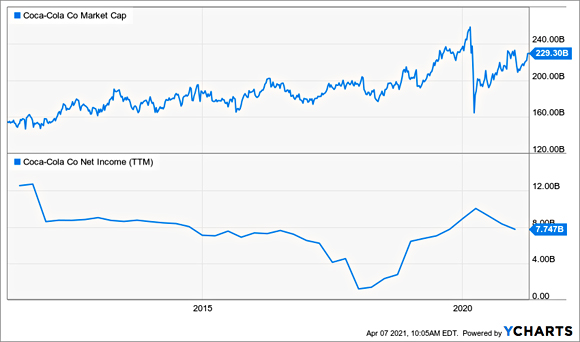 Awhile back we addressed these same over-valuation issues during a interview on the outlook for the post-Covid economy. With the passage of time, the threat from Washington has only metastasized measurably, even as the bubble has continued to swell.