Update 1546EST: The stock has been halted higher, making a fifth halt on the session.

Update 1537EST: The stock has been halted lower a fourth time. Good thing there’s only 23 minutes left in the cash session. 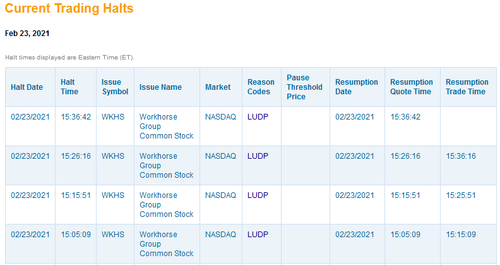 Shares of Workhorse imploded on Tuesday afternoon after news broke that the United States Postal Service awarded a 10-year contract to manufacture a new generation of U.S.-built postal delivery vehicles to Oshkosh.

Workhorse was rumored (and widely expected judging by the price reaction) to be in the running for the contract, which was a frequently touted piece of the bull case by investors. On the news, Workhorse shares plunged by over 50% and have been halted three times. 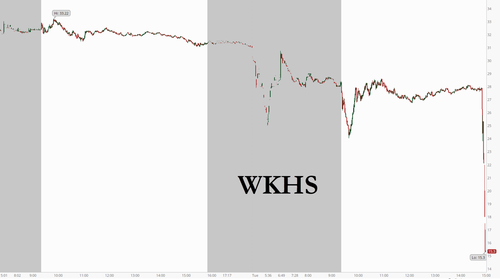 Recall, several short sellers had targeted Workhorse over the course of the past year, noting that the USPS contract was unlikely. Both Hindenburg Research and Fuzzy Panda research took victory laps on Tuesday afternoon after the stock’s plunge.

After several delays, $WKHS indeed did not get the contract from USPS, as predicted.

USPS just told Wall Street about $WKHS what we informed the public about 4 months ago.

The contract is going to OshKosh & Fordhttps://t.co/6XfK7U9WyE

The U.S. Postal Service announced today it awarded a 10-year contract to Oshkosh, WI, based Oshkosh Defense, to manufacture a new generation of U.S.-built postal delivery vehicles that will drive the most dramatic modernization of the USPS fleet in three decades.

Under the contract’s initial $482 million investment, Oshkosh Defense will finalize the production design of the Next Generation Delivery Vehicle (NGDV) — a purpose-built, right-hand-drive vehicle for mail and package delivery — and will assemble 50,000 to 165,000 of them over 10 years. The vehicles will be equipped with either fuel-efficient internal combustion engines or battery electric powertrains and can be retrofitted to keep pace with advances in electric vehicle technologies. The initial investment includes plant tooling and build-out for the U.S. manufacturing facility where final vehicle assembly will occur.

This story is developing…

Waiting For The Other Shoe To Drop…