“There’s liquidation across the board and a flight to safety,” said John Kilduff, a partner at Again Capital LLC.

“There’s also a nice snapback in the dollar, so some of the support the weak dollar had lent to the commodities complex and crude is being removed as well here.”

The possible saving grace for this downside move in crude is a DOE confirmation of API’s bigger than expected crude draw.

After the prior week’s surprise crude build, analysts expected a modest draw but official data showed a huge 9.91mm barrel drop in stocks… 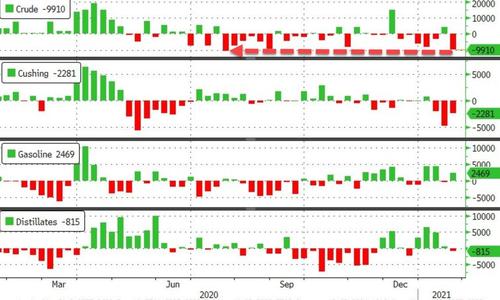 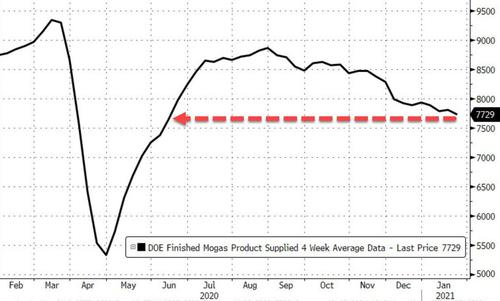 Crude production has been stable in recent weeks, despite a rising rig count and higher prices, but it actually dropped last week… 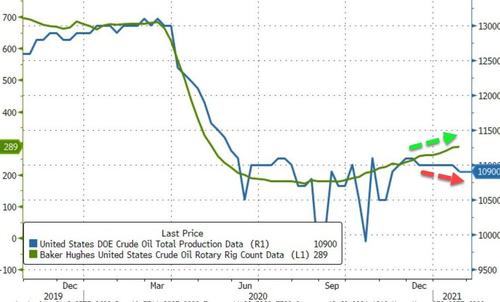 As Vince Piazza, senior energy analyst at Bloomberg Intelligence, said: “While WTI has rebounded past $50 a barrel, we believe U.S. E&Ps remain cautious about deploying capital and ramping up output, which in itself remains an overriding risk. With Covid-19 cases still elevated, U.S., downstream demand could remain muted even as demand is starting to show some improvement.”

WTI hovered around $52.40 ahead of the official inventory print 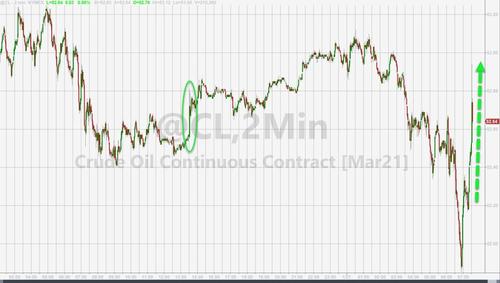 Still, as Bloomberg notes, prices are finding some support as the overall market structure is reflecting a much stronger picture. The premium of Brent and West Texas Intermediate crude’s nearest contract is widening over the next one in a bullish formation known as backwardation. The oil market’s switch to backwardation means “we are hopeful that 2021 will be a good year,” the Organization of Petroleum Exporting Countries Secretary-General Mohammad Barkindo said Tuesday.