Oil prices have tumbled since API’s surprise crude build, but stimulus hopes in the US continue to battle record COVID case/death headlines in the bull/bear battle for crude.

The Covid-19 situation “is keeping the oil market heeled, unable to take the next leg higher,” said John Kilduff, a partner at Again Capital LLC.

However, this morning has seen a ramp from the low $51s as Biden’s Executive Orders restraining new drilling sparked bullish calls from Goldman.

DOE confirms API’s reporting with the first crude build of the year (but a major draw at Cushing, which is central to WTI pricing), 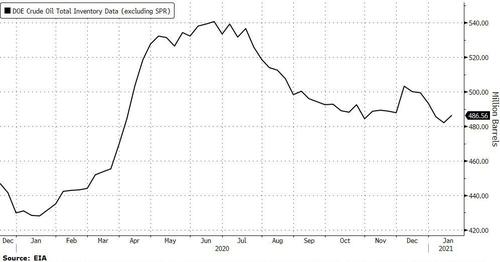 Gasoline Demand rebounded in the prior week… 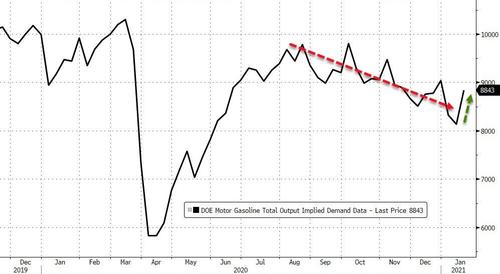 While rig counts have risen notably, US crude production remains well-disciplined (for now) in the face of rising prices… 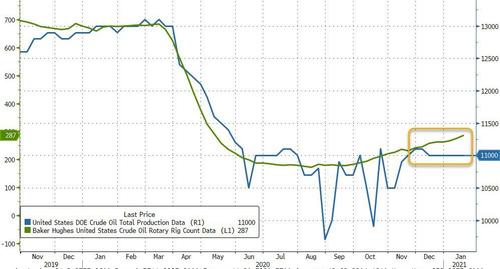 WTI hovered just below $52.80 ahead of the official DOE inventory data and rolled over as the build data hit… 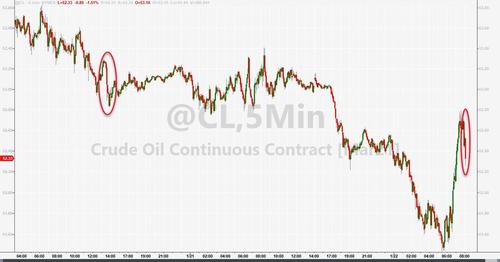 “So far, it is the supply side of the equation that’s moving prices; however if demand falls further, problems may arise for OPEC+ who are doing their best to keep the equation balanced,” said Hussein Sayed, chief market strategist at FXTM, in a note.

Despite an uncertain short-term consumption outlook, crude is still trading near the highest level in almost a year as investors pile into commodities and global inventories are seen depleting as the year goes on. There’s been a boost to energy use from cold weather, while Saudi Arabia’s unilateral output cuts and a weak dollar have also buoyed the market.

As Vince Piazza, senior energy analyst at Bloomberg Intelligence, noted, “Demand challenges still linger despite higher WTI prices and optimism about vaccine distribution. This is compounded by the potential for the U.S. to shift toward cleaner-energy sources under the Joe Biden administration, amid heightened social pressure to move away from hydrocarbon consumption.”

All Hail The Conquering Central Bankers… Or Else

WATCH: Searching for life in the oceans of outer space