“We have come a long way from a year ago,” OPEC chief Mohammad Barkindo said.

“The days of GDP and oil demand figures being in the red because of the pandemic-induced shock appear to be behind us.”

Sounds a little optimistic. This week’s inventory data will likely be extremely noisy, dominated by the turmoil in Texas.

Huge product draws suggest demand but with refineries largely shut-in due to Texas, inventories were crushed to meet what demand there was elsewhere. Crude stocks surprisingly rose (again no demand from refiners) 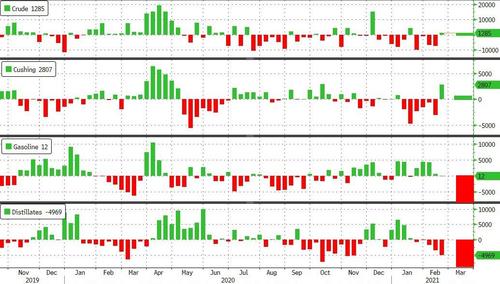 WTI extended its losses after the surprise crude build… 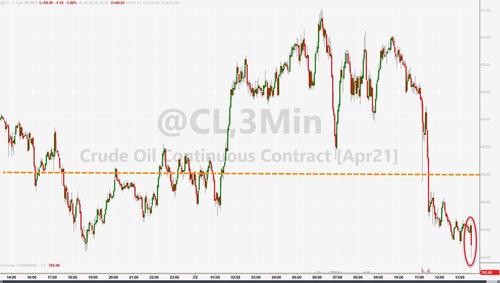 “It is a difference between what was expected and what was hoped. What you expect is that they will raise production, what you hope is that they don’t.”

Finally, we note the timing of OPEC+’s potential move to slow the rise comes as US gas prices (at the pump) head up towards $3.00…

“Gas prices are coming into the month of March like a lion.. and might end up leaving the same way,” GasBuddy’s oil and refined products analyst Patrick de Haan says.

If OPEC+ decides this week to put more oil back to the market, it could cool off the rally in crude prices and, consequently, the continued rise in U.S. gasoline prices with the summer driving season approaching, Matt Egan at CNN Business argues.

China Is Now Competing With The World For Capital