Oil prices rollercoastered overnight, rallying on the surprise API-reported crude draw and then slumping during the EU session amid demand concerns (driven by the terrible vaccine rollout).

“The suspension [of AZN vaccines] will not do the bloc’s economic and fuel recovery any favors,” said Stephen Brennock of oil broker PVM.

“The hope now is that Europe can get its sluggish vaccine rollout back on track.”

Oil weakness was exacerbated by IEA’s latest report that said a supercycle was unlikely, demand won’t return to pre-pandemic levels until 2023 and could peak earlier than previously thought.

After the prior two weeks of record-breaking swings in inventories, this last week is expected to show only modest changes, with crude stocks sitting at their highest since early December. 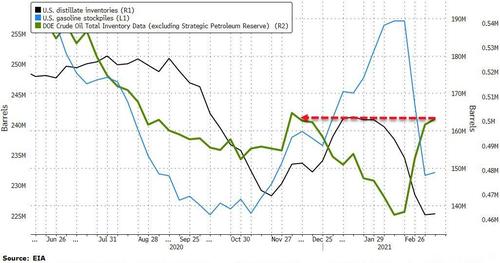 Despite refinery utilization recovering from the weather chaos in Texas, crude stocks increased last week (significantly more than API and was expected). 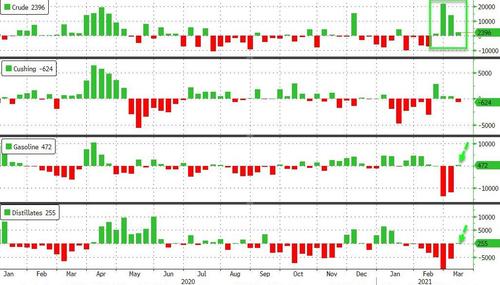 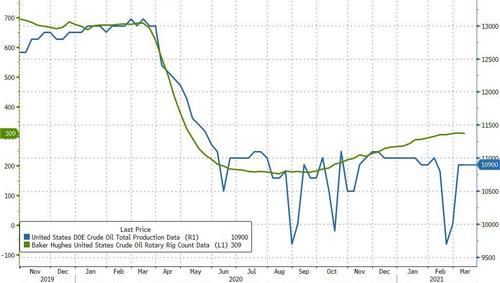 WTI hovered around $64.50 ahead of the official inventory data and reversed its rebound on the print… 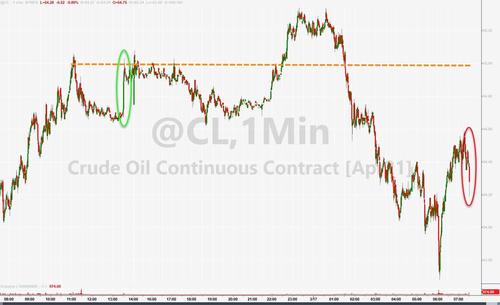 On the bright side, that $3.00 nation gas price may be avoided.

Willful Blindness, Societal Rift, & The Death Of The Dollar

Goldman, JPM Expect Econ Activity In April, May To Top “Anything We’ll See In Our Careers”

Pento: “This Is The Most Overvalued Market We Have Ever Had In History”