After surging to its highest since 2018 (on Saudi oil terminal explosions), oil prices have tumbled for the second straight day with WTI back below $64 as EIA forecast U.S. crude oil production in 2022 at 12.02m b/d, up from the 11.53m b/d projected in February.

“Then we had the OPEC surprise and the Saudi attack, triggering the last key surge where now a lot of the recovery and demand expectations due to the vaccines’ success has already been priced in.”

After last week’s utter chaos in the inventory data (due to Texas storm impacts), this week is likely to be just as noisy as things switched back on.

And as expected, this week’s data is chaotic too – a huge crude build for the second week in a row and major product draws… 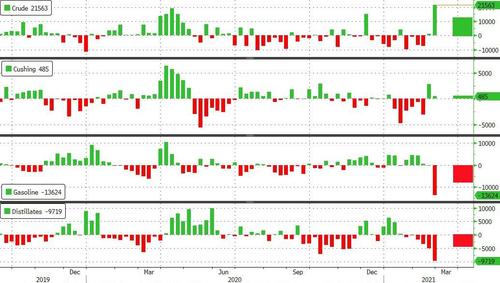 WTI hovered just below $64 ahead of the print, dropped and popped after but maintained its losses… 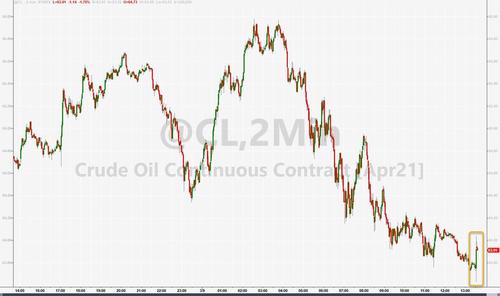 “You can tighten as much as you want, but if you destroy the refining margins and product demand isn’t there, then effectively you don’t really get much further up the chain.”

In its monthly Short-Term Energy Outlook, the EIA said that while the price Brent oil, the global benchmark, is currently high due to OPEC+ supply restrictions, it expects it to average US$58 per barrel in the second half of the year.