Oil prices extended their losses today as a panel of OPEC+ technical experts agreed to revise down oil-demand estimates for 2021 after Saudi Arabia suggested that the figure looked too high. This built on supply fears easing as the Suez Canal reopened, and also on demand concerns after the CDC Director’s melt-down yesterday (and lastly a stronger dollar didn’t help)

“While last month saw many positive developments, it also witnessed reminders of the ongoing uncertainties and fragility caused by the COVID-19 pandemic,” Barkindo said at the start of the videoconference of the OPEC+ Joint Technical Committee on Tuesday, according to a statement from the group.

But for now, all (algo) eyes are on the most recent inventory data 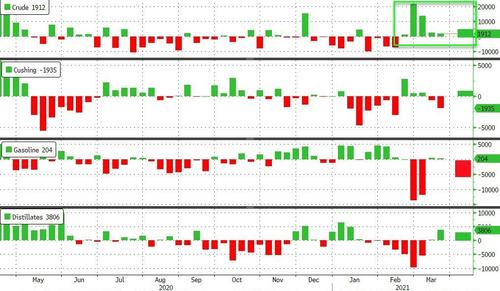 “The price gains that accumulated during the Suez blockade were, as expected, short-lived and are now being erased with the gradual return to normal traffic,” Rystad Energy’s oil markets analyst Louise Dickson said.

WTI bounced off $60 intraday and hovered around $60.40 ahead of the API data and inched lower after the surprise build… 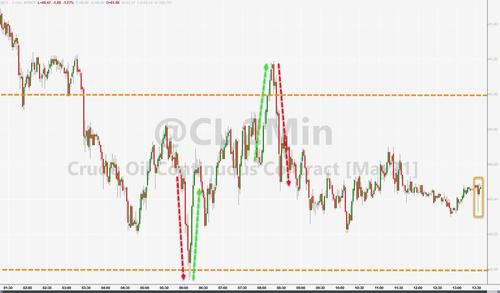 “The wobble we have seen in prices means that OPEC+ will likely need to take a cautious approach once again,” bank ING said. “We are of the view that the group will likely hold output levels unchanged.”

Finally, on a more optimistic note, OPEC expects the global oil-stockpile surplus that built up during the pandemic to be mostly gone in the next three months, earlier than previously forecast.

Nomura: Why The CPI Release Is A “Buy The News” Trade In Almost Any Scenario

(READ) Trump statement on an elected official’s opposition to 2020 audit in Penn.