WTI Pumps-n-Dumps After Crude Draw Ahead Of OPEC+ Meeting

Oil prices chopped around overnight but are basically flat ahead of this morning’s inventory/demand/production data. Weakness came on concerns about the market’s recovery after OPEC and its allies lowered their 2021 demand growth forecast, although strong Chinese factory activities lent some support (China’s manufacturing activity expanded at the quickest pace in three months in March as factories cranked up production after a brief lull during the Lunar New Year holidays).

The Organization of the Petroleum Exporting Countries and allies, together called OPEC+, are set to meet on Thursday, to decide on output policy.

“Given this pessimistic outlook, it seems likely that the production quotas will be left in place for another month,” said Commerzbank analyst Eugen Weinberg.

OPEC oil output rose in March as higher supply from Iran countered reductions by other members under a pact with allies, a Reuters survey found, a headwind for its supply-limiting efforts if Tehran’s boost is sustained.

For now, focus is on US activity. 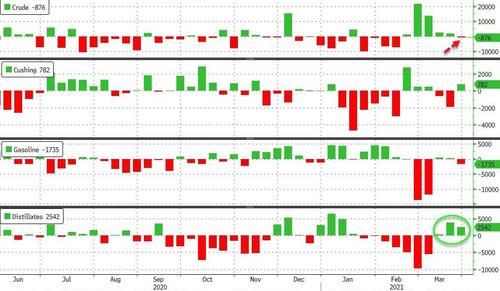 Overall crude stocks remain near their highest since August 2020. 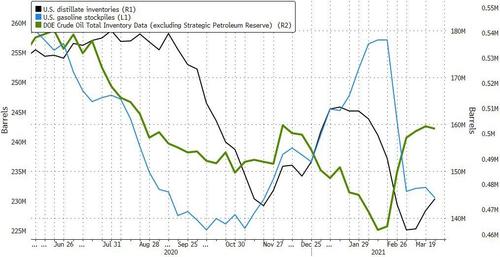 As rig counts continue to rise, US crude production remains “disciplined” as prices have risen… 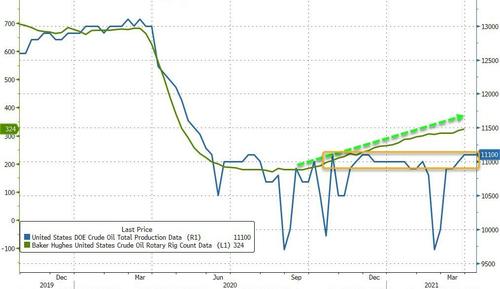 WTI was hovering around $60.50 ahead of the official data this morning (having found support at $60 and resistance at $61 overnight). It spiked up near $61 very briefly after the print, then fell back… 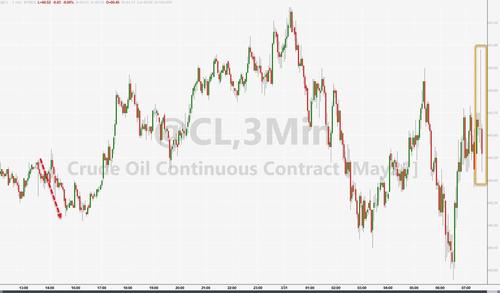 Finally, on a more optimistic note, OPEC expects the global oil-stockpile surplus that built up during the pandemic to be mostly gone in the next three months, earlier than previously forecast.

“The oil market is still playing a guessing game today as to what supply policy OPEC+ will set out at tomorrow’s meeting, but the $64 per barrel Brent price signals that traders expect a cautious approach from the alliance,” said Rystad Energy’s analyst Louise Dickson.

There Is More to BlackRock Than You Might Imagine

Era Of Fake Money Is Gone: Egon von Greyerz Warns “No One Can Escape What’s Coming”