WTI Tumbles Back Below $60 As Contango Returns

Amid concerns about European demand (as increasingly restrictive lockdowns are reintroduced) and the beginnings of anxiety about US demand (as case counts rise), over-supply fears are rising again as consultant Energy Aspects notes in a report that the last commercially available 150m-200m bbl of storage built up last year (not only land-based storage – remember all those tankers at anchor floating around the world, buoyed by low prices and strong carry)  is now being released and hurting physical crude markets. 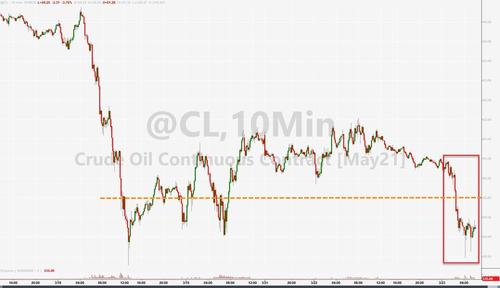 WTI also tumbled to its 50DMA… 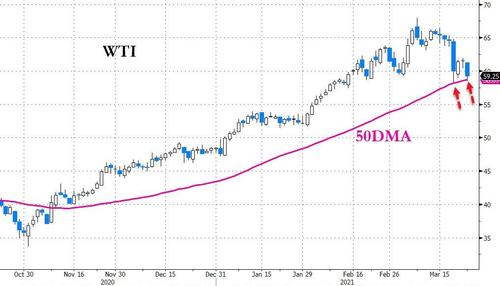 This anxiety is seen also in the Brent curve, now in Contango…

The over-excited good news on reopening had been baked in and is now being challenged amid an uneven pandemic recovery. Climbing COVID cases in oil-importing countries like India, stagnating crude demand in Asia and extended European lockdowns are sparking near-term demand fears, which have created a contango in the brent curve. 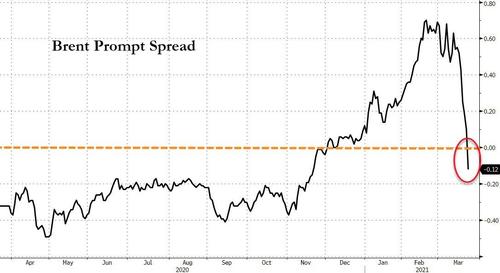 The prompt timespread for Brent futures slipping to contango for the first time since January adds to the headwinds. As a reminder, contango (not to be confused with backwardation) is a bearish structure that generally signals oversupply, and it makes it loss-making to roll from one month to the next, and as a result it can often spark price selloffs when the market flips, and greenback strength is weighing across the broad commodity complex, with oil-linked FX under pressure.

Still, according to Energy Aspects, this time contango may actually presage even higher prices because according to a report, “the last commercially available 150m-200m bbl of storage built up last year is now being released and hurting physical crude markets.” The report goes on to note that shipments from Saldanha Bay and the Caribbean were nearly three times higher over the January- February period than they were in 4Q. This, combined with flushing out of weak bullish bets, may push prompt Brent spreads briefly into contango, though it’s unlikely to be sustained, EA wrote however repeating that it still expects a rally in prices this summer, and crude will be $73/bbl by year-end.

To justify its optimism, the report notes that destocking and weakening of physical markets “is very much a part of the rebalanacing process” although it caveats that return of Chinese buying will be key for turning the market around.