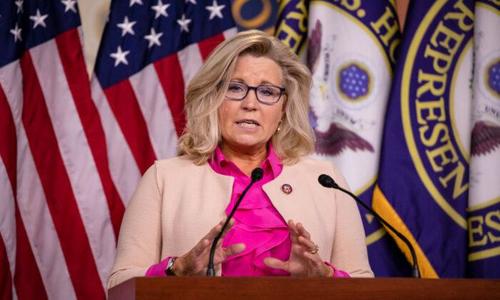 While there was no formal vote count, only eight of the 74 members of the party’s central committee stood up to show their opposition to the censure. The censure document stated that Cheney voted to impeach even though the House of Representatives did not offer Trump a “formal hearing or due process.”

“We need to honor President Trump. All President Trump did was call for a peaceful assembly and protest for a fair and audited election,” said Darin Smith, a Cheyenne attorney who lost to Cheney in the Republican U.S. House primary in 2016.

“The Republican Party needs to put her on notice.”

Added Joey Correnti, GOP chairman in Carbon County where the censure vote was held: “Does the voice of the people matter, and if it does, does it only matter at the ballot box?”

Cheney was among 10 Republicans who voted with the Democrats to impeach Trump. The article of impeachment accuses the president of inciting the mob that breached the Capitol on Jan. 6. Trump has denied the accusation.

In a speech on Jan. 6, Trump urged supporters to make their voices heard peacefully. The president mentioned Cheney by name in the speech and told the crowd to vote against lawmakers like her in the next election.

The outer perimeter of the Capitol was breached when Trump was delivering his address at a location roughly a 45-minute walk away.

Cheney has said she voted her conscience. In a statement announcing her intention to vote for the impeachment, she alleged that Trump “summoned this mob, assembled the mob, and lit the flame of this attack.”

In response to the censure vote, Cheney said she remained honored to represent Wyoming and will always fight for issues that matter most to the state.

“Foremost among these is the defense of our Constitution and the freedoms it guarantees. My vote to impeach was compelled by the oath I swore to the Constitution,” Cheney said.

Republican officials said they invited Cheney but she didn’t attend. An empty chair labeled “Representative Cheney” sat at the front of the meeting room.

The censure vote is the most recent backlash against her impeachment vote. A political action committee started by former Trump campaign manager Corey Lewandowski is working to beat Cheney in the Republican primary in 2022. Two Republicans are already running against her in the race, including Republican state Sen. Anthony Bouchard, a gun-rights activist from Cheyenne, who was at the meeting but not among those who spoke.

Rep. Matt Gaetz (R-Fla.) led a rally against Cheney on Jan. 28 in front of the Wyoming Capitol. About 1,000 people took part, many of them carrying signs calling for Cheney’s impeachment, though several were supportive.

House Republicans voted on Feb. 3 to keep Cheney as their conference chair.