Yellen’s “Go Big” MMT plan was fulfilled this week as the Government passed the mammoth $1.9 trillion “American Rescue Plan Act of 2021.” While she recently stated that “Right now, with interest rates at historic lows, the smartest thing we can do is act big,” there is mounting evidence such actions may disappoint.

If you haven’t heard about Modern Monetary Theory, or “MMT” for short, by now, you will soon. MMT is gaining traction by economists and politicians from both sides of the aisle as the economic prescription, even panacea, to cure our economic ills. Regardless of your view, MMT will have large effects on economic growth and prosperity.

“Modern Monetary Theory is a macroeconomic theory that contends that a country that operates with a sovereign currency has a degree of freedom in their fiscal and monetary policy which means government spending is never revenue constrained, but rather only limited by inflation.” – Kevin Muir

So, there you have it.

Debts and deficits do not matter as long as the Government can print the money it needs to pay for its wants.

That is the “you can have your cake and eat it too” theory in a nutshell.

What People Need Is Employment

Janet Yellen believes that doing more of the same will have a different result next time. To wit:

“As treasury secretary, I have to worry about all of the risks to the economy, and the most important risk is that we leave workers and communities scarred by the pandemic and the economic toll that it’s taken, that we don’t do enough to address the pandemic.

I’ve spent many years studying inflation and worrying about inflation, and I can tell you, we have the tools to deal with that risk if it materializes. But we face a huge economic challenge here and tremendous suffering in the country. We’ve got to address that. That’s the biggest risk.”

While more stimulus checks will undoubtedly help those still mired in unemployment since the pandemic began, such doesn’t fix their problem. What they need is employment, and as we noted previously, the stimulus is not the answer.

“To increase employment, which is the single most considerable cost to any business, you need two things:

Currently, there is little expectation for a strongly recovering economy. Such is the requirement for increasing employment and expanding capital expenditures.” 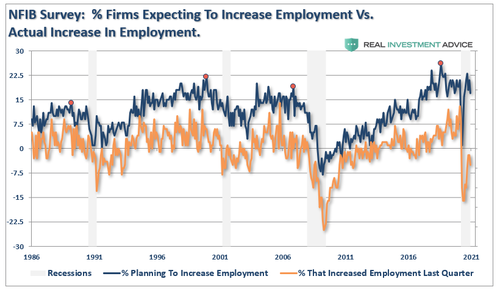 “Such also helps you understand the biggest problem with artificial stimulus. Yes, injecting stimulus into the economy will provide a short-term increase in demand for goods and services. When the funds are exhausted, the demand fades.

Small business owners understand the limited impact of artificial inputs. As such, they will not make long-term hiring decisions, an ongoing cost, against a short-term artificial increase in demand.”

As Ms. Yellen noted in her statement, inflation from “doing too much” is a risk. However, not surprisingly, she dismissed that risk suggesting the Fed has the right “tools” for the job.

The problem is that her “toolbox” to fight inflation has just one tool: rate hikes. As we have discussed previously, once the Fed starts hiking rates to combat inflationary pressures, it quickly leads to an economic recession and a financial crisis. 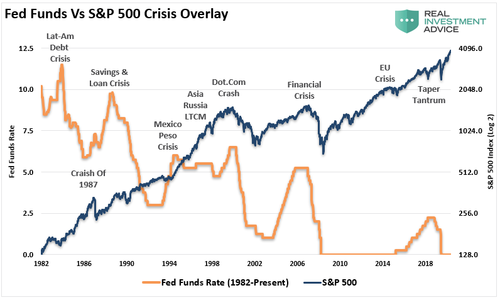 Currently, another inflationary spike due to the massive surge in M2 (money supply) is possible. Historically, inflation follows within roughly 9-to-12 months. With the current Administration dumping nearly $2 Trillion more into the economy, the risk of an inflationary spike has risen sharply. 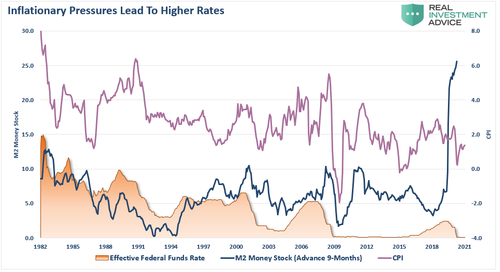 If inflation does surge, as expected, the Fed will become trapped very quickly between their “mandate” of stable pricing and wanting to keep asset prices inflated.

Unfortunately, it may not matter what “the Fed” wants.

While the Federal Reserve will likely continue to dismiss spiking inflationary pressures as “temporary” or “transient” to keep from hiking interest rates, the market may not agree.

Currently, the consensus is that economic growth in the U.S. will increase to nearly 6% in 2021 due primarily to the stimulus injections. As shown below, Goldman Sachs currently expects GDP to approach 5.8% (nominal) this year. 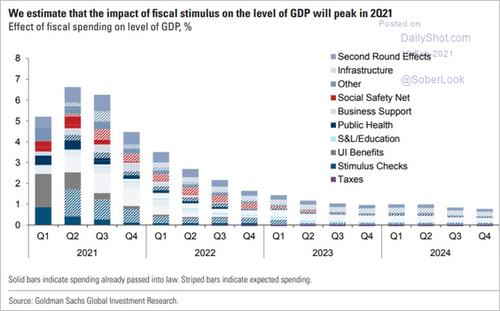 The problem is that since there is a very high historical correlation between inflation, rates, and economic growth, you can’t have one without all three. As shown, if economists do get their wish for higher prices, such also corresponds historically with higher inflation and rates. 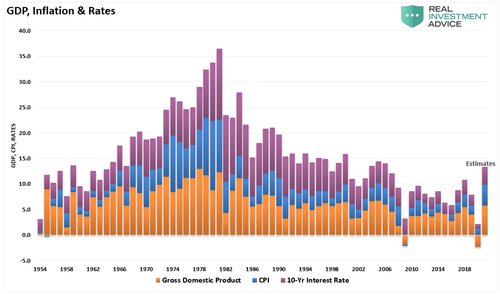 As I stated, while the Fed may suggest the inflation is temporary, in a heavily indebted economy, increases in rates and inflation are problematic. Moreover, higher rates also undermine the financial markets whose valuation premise relies on low rates. 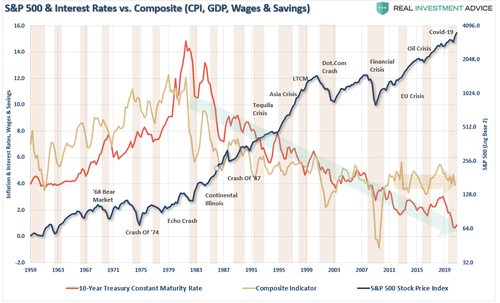 Each time rates have “spiked,” it has generally preceded market corrections or worse throughout history.

But that is assuming the economist are right.

Strong Growth For A Minute

I agree that we will likely see higher rates of economic growth over the next couple of quarters. Such will undoubtedly get touted as “evidence” that stimulus worked. As Carl Quintanilla from CNBC recently tweeted:

JPMORGAN: “We expect consumers to blowout expectations for rest of the year given:

However, economic growth may wind up disappointing estimates.

Following the initial $2.2. trillion CARES Act; many individuals believed the majority of job losses were temporary. As such, consumers were willing to “spend” money more freely under the assumption they would be re-employed soon.

Currently, many of those “temporary layoffs” have now become “permanent.” With bills piling up at home, rent and mortgage payments in arrears, and job prospects remaining elusive, much of the Biden stimulus may go to paying bills rather than spending. If such is indeed the case, then the benefit of stimulus in the short-term will get marginalized.

Secondly, the estimates for explosive growth came from the rebound in economic activity following the “economic shutdowns” last year. The thought process is that as soon as the “vaccine” gains traction and the economy fully reopens, there will be a release of “pent up” demand.

While it is likely that many will see a sporting event or take a trip, these are activities that individuals don’t repeat regularly. When it comes to the rest of the economy, much of the “pent up” demand has diminished. Individuals have already been spending money on things they want or need, as witnessed by the latest retail sales surge. 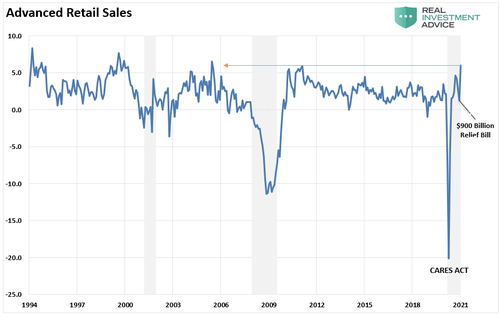 The other problem is the misunderstanding of statistics.

As Carl states, on the surface, it certainly appears the average American is finally much better off now than before the pandemic. Of course, if that was indeed the case, why do we have such a rush for more stimulus?

The reality is that most of these numbers relating to debt, solvency, and savings rates get skewed by the top 20% of income earners. Such is why the bottom 80% remain highly dependent on more stimulus to make ends meet. We discussed this in greater detail in the “Savings Myth,” but here is the vital point.

“More importantly, the top 20%, and specifically the top 5%, of income earners skew the measure. Those in the top 20% have seen substantially larger median wage growth versus the bottom 80%. (Note: all data used below is from the Census Bureau and the IRS.)” 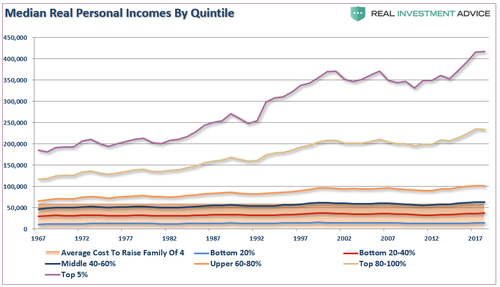 “Since the top income earners have more than enough income to maintain their living standards, the balance falls into savings. This disparity in incomes also generates a “skew” to the savings rate.

Yes, there is a significant amount of cash and deposits relative to the economy, which is also skewed higher by falling GDP, but the wealthy have it.

If savings were indeed soaring, then the average American wouldn’t be so concerned about their financial security.”

The reality is that a large number of Americans remain in ongoing financial distress. It existed before the pandemic but has since worsened. Despite a surging stock market that has increased the wealth disparity in the economy, most Americans remain financially insecure.

A Return To Sub-Par

The illusion of surging savings rates, or the decline in the debt-to-income ratios, obfuscates the real economic problems and fosters the belief that monetary policies are working.

The majority of Americans cannot increase consumption, the driver of economic growth, without further stimulus. As we saw in Q4 of 2020 when the stimulus ran out, so did the economic growth. Such will be the case after the next stimulus bill runs through the system. Such was a point we illustrated in “Sugar Rush:” (Note: I have updated the previous chart to include the $1.9 trillion stimulus bill) 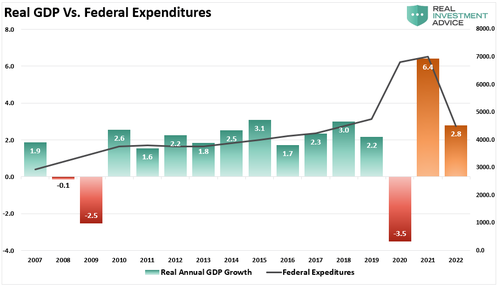 More importantly, even with the stimulus included, economic growth will still trend lower than prior to the last two recessions. 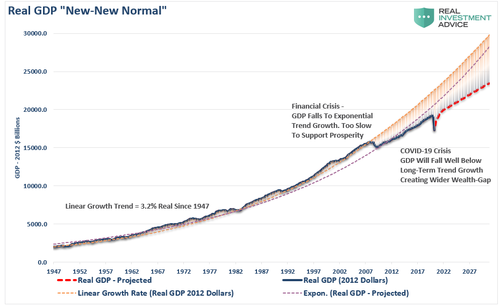 The lesson not learned by economists and elected leaders is that stimulus, derived from debt, gets used for non-productive purposes. Such only succeeds in further inhibiting economic prosperity in the future.

Yes, Janet Yellen has a “go big” MMT dream. However, the risk of a “rude awakening” is high in that it delivers inflation, exacerbates income inequality, and increased social instability. Such was the result in every other country which has run such programs of unbridled debts and deficits.

While the idea of MMT sounds excellent at the conversational level, so does “communism” and “socialism.” In practice, the outcomes have been vastly different than the theory.

“It is truly ‘American Gridlock’ as the real crisis lies between the choices of ‘austerity’ and continued government ‘largesse.’ One choice leads to long-term economic prosperity for all; the other doesn’t.”