Yields Are Surging Ahead Of Auction After ECB Ambiguity

After yesterday’s mixed bag in the 10Y Auction (which tailed modestly but yields had plunged into the bid), all eyes are on the big 30Y auction today – especially in the wake of the passing of the $1.9 trillion stimmie bill that is going to need funding.

Initially yields tumbled earlier after ECB headlines crowed of doing ‘moar’ bond-buying. But the details were less convincing (they won’t be looking at weekly purchasing data, but rather making changes on quarterly basis… they aren’t “micromanaging operations”. Don’t expect a notable increase in bond buying data on Monday – those “significantly higher” purchases ahead kick in now).

Bunds retraced some of their gains 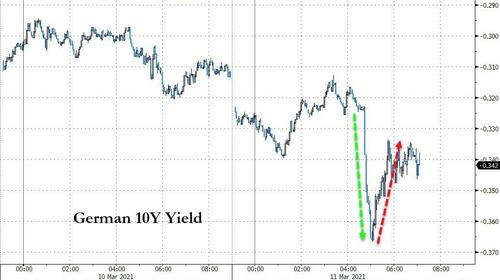 And US Treasury yields surged back higher on the day… 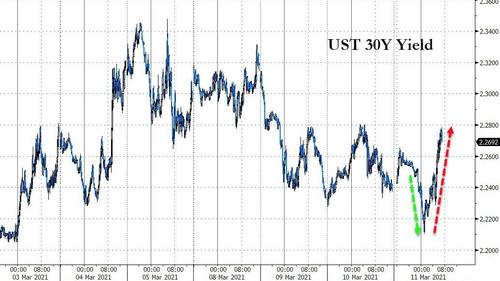 Today’s $24b 30-year bond reopening at 1pm ET is poised to draw the highest yield for an auction in the sector since January 2020. With yields near pre-pandemic highs and belly most at risk of further cheapening, the auction should be orderly, JPMorgan strategists said in a note; they wouldn’t be surprised by a tail, however, unless end-user support is higher than average.

The way things are moving this morning is not a good sign for the auction and we wonder if the sinking dollar is reflective of a loss in faith in the reserve currency after yesterday’s completely partisan vote.