While not nearly as closely watched as the 10Y or the 30Y, the relatively new entrant to coupon auctions (it returned after a three decade hiatus last May) the 20Y auction which just priced with a slight delay today, was a blockbuster success.

The Bid to Cover soared from a paltry 2.15 in February to 2.51, the highest since June and an impressive reversal to the declining BTC trend observed in recent months. 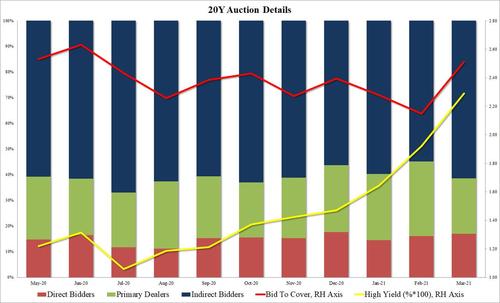 While the impressive auction result was remarkable in itself, what was just as notable is the plunge in yields observed across the curve but especially in the 20Y which tumbled by almost 5bps once the auction priced. 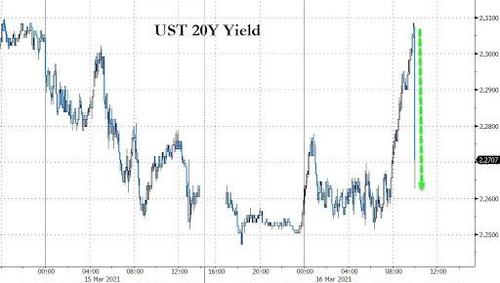 What sparked the selloff?

It’s unclear but likely to have been recent muscle memory following the catastrophic 7Y auction from 3 weeks ago, and with the FOMC tomorrow traders were likely quiet nervous and unwilling to have too much exposure ahead of tomorrow’s main event. As it turned out there was no need to worry, but while bond buyers may be laughing today it can all change on a dime tomorrow depending on what Powell says on Wednesday because just one day after today’s auction, one hawkish comment too much from Powell and we will see a historic wipe out not only for the 20Y TSY but across the entire long end.

WATCH: Fauci Announces the US Will Rejoin the World Health Organization, Promises to Give Them Our Money