In previewing today’s 30Y auction, which just like yesterday’s 10Y reopening, could make or break the bond market (especially with JPM warning that growing imbalances in supply/demand dynamics could have adverse consequences for the US Treasury market), we said that “we anticipate that today’s 30Y auction will sneak through without much effort,” and that’s precisely what happened at 1pm today when the Treasury sold $24BN in ultra-long dated paper in the form of a 29-year 11-month reopening.

In a carbon copy of yesterday’s strong 10Y auction, the high yield of 2.295% tailed the When Issued 2.290% by 0.5bps, a modest amount considering just how jittery the market has been recently, while the concessions into the auction – largely a function of the massive rate locks as part of Verizon’s $25BN, 7 part offering – helped push yields to session highs just ahead of the auction. 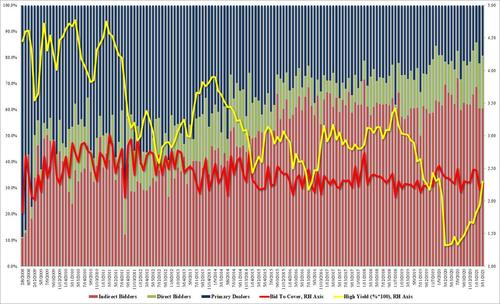 Bottom line: another day, another solid auction, but more importantly, one less near-failed 7Y auction which started the rout exactly two weeks ago. As such, yields dipped accross the curve, with the 10Y sliding 3bps from 1.54% to 1.51%, and the 30Y dropping my a similar amount as the bond market breathes a sigh of relief. 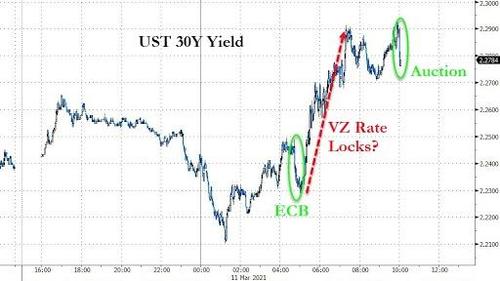