Last week we asked if Biden’s $2.25 trillion “Infrastructure” plan, also known as the American Jobs Plan (not to be confused with its sequel the American Family Plan) will pass Congress, and observed that the plan’s fate will ultimately depend on how centrists such as Joe Manchin and Kyrsten Sinema end up voting:

Centrist Senators such as Joe Manchin and Kyrsten Sinema, who also featured in Rabo’s American Rescue Plan report, may be difficult to keep on board. In other words, while the American Jobs Plan has the potential to unite the Republicans in their opposition to Biden, it will also put tremendous pressure on the internal relations between the left and the right of the Democratic Party.

Since then, amid increasing criticism by progressives (and outright opposition by the GOP) of the Biden infra plan, the market appears to have repriced the likelihood of the $2.25TN plan passing, with Bloomberg yesterday noting that “the response so far in bond markets has been muted, with inflation concerns easing amid doubts over the viability of more-generous spending, even as central banks remain committed to keeping interest rates lower for longer.”

It is these growing doubts about the passability of the Biden infrastructure plan that explains why yields dipped on Monday despite the blockbuster jobs report, and why both 5Y and 10Y yields have slumped further today. 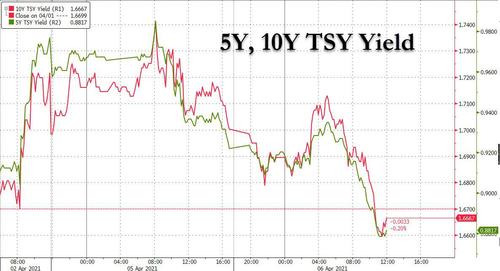 Adding to the skepticism that the Biden deal will get done, in a note from Capital Alpha Partners analyst Byron Callan, he wrote that the federal infrastructure spending bill proposed by Biden “has no straight easy path to approval in 2021.”

“The notion that there is broad bipartisan support for infrastructure in Congress is a canard,” Callan said, noting in 2017-2020, that bipartisanship on infrastructure had melted away over how to pay for it, what comprised infrastructure, roles for the private sector versus government, regulatory changes, urban versus rural needs, and red state versus blue state posturing.

Callan said that those underlying factors have still not changed, and added that the only reason to expect broadly defined infrastructure spending increases in 2021 and beyond is that Democrats have razor-thin margins in the House and Senate and that the White House is making this a major push.

One potential offset to the mounting skepticism is what happened last night, when the Senate Parliamentarian made a preliminary ruling that the Senate can use the reconciliation process more than once per fiscal year.

This, as Goldman opined this morning, “is not a surprise” and as Goldman economist Alec Phillips writes, it “means that Senate Democrats will have the opportunity to move more bills through the process with only 51 votes. In theory, this could allow them to pass a variety of fiscal initiatives separately, rather than one large bill.”

But, as Goldman concedes, “the constraint on multiple reconciliation bills was not procedural, it was political, and the political disadvantages haven’t changed” and adds that “while passing two further reconciliation bills remains a possibility, congressional Democrats are still more likely to add any other fiscal priorities to the upcoming infrastructure bill, and to pass one large bill in Q3.”

The question, of course, is how likely is that bill to pass. Looking at 5 and 10Y yields, the odds appear to be sliding, which is also why we have seen a sharp reverse rotation out of value stocks (which trade in lockstep with 10Y yields) and back in the growth/tech names that had been left for dead while the Biden admin was proposing trillions in new stimulus weekly if not daily.

Trump Calls This Man “One Of The Dumbest People In Washington” – Cites N.Korea Policy