“You Have 3 Choices” – How One Crypto Skeptic Sees The World

Authored b Bill Blain via MorningPorridge.com,

“The value of assets may go down…”

There was a great chart doing the rounds on Linked-in yesterday – showing how Bitcoin and Tesla have moved in apparent lockstep since the market turned around in March. It attracted loads of comment – balanced between those who saw them both as examples of speculation gone mad, and those who discern serious value and “time-has-come” acceptance in both “assets”. 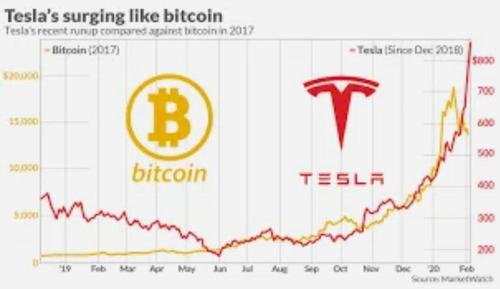 I’m almost apologetic writing about Tesla and Grotcoins again and again – there are really important things going on out there in terms of inflation, the bond market, and disbelief, but I it’s important to try to understand there is nothing normal about today’s markets. There is nothing in market experience like the current run of speculative assets (well not since… the South Sea Bubble, The Louisiana Company, The Railway Bubble, LTCM and Enron…)

You could spend a lifetime arguing about the multiple unfamiliar social factors underlying the present market, and what’s driving such fervid moves. I suspect the real reasons for the market’s current valuations have as much to do with sociology, headology (the study of FOMO), and what-to-do-in-lockdown-ology, as they do to convential analyis.

What is driving markets? Is it the implied promise of central banks and government to keep bailing out markets? Is the sheer volume of money chasing assets? Is it the fear of inflation driving investors to seek inflation hedges? Or is it bored millennials grasping at straws? Is it an increasing sense that beating Wall Street at its own game is revolution? From my perspective the frenzy around meme driven stocks like Gamestop, Cryptocurrencies and Messianic stocks like Tesla (driven by belief in Musk rather than facts about the company) are all part of the same thing – crowd behaviour, which is ultimately all about how sheep behave.

Or, is it the current madness a reflection of how debate, conversation and dialog are breaking down in modern society? I’ve noticed so many people don’t listen anymore.. they just talk and talk. The ability to actually think things through to a logical end seems to be diminishing. Instead, folk learn what they think they need to know from social media and fake news reinforcing their prejudices

I can understand why lots of folk now think I’m too old and out of touch to have any valid modern investment opinions – it says so on Zerohedge posts. (The BBC binned me from financial commentary for being “Pale, Male and Stale” a number of years ago.) But, I still got a tenuous grasp on financial comment sense, a scarce resource when it comes to crypto currencies.

Yes… Buttcoin is terribly clever. Yes.. it might replace fiat currencies if fiat currencies collapse – but so could cowrie shells. I think if you end up stuck in a desert and arrive at the proverbial oasis, the proprietor will sell the last bottle of water to the traveller with the gold bar rather than the one brandishing a crypto-wallet.

I am told – repeatedly – the moment for Bitcoin has arrived. Widespread adoption by Pay-pal, Morgan Stanley, Ruffer etc, all give it enormous credibility. And to capstone its arrival – now you can buy a Tesla with bitcoin. No. You can’t. You will pay the Bitcoin/dollar rate for a Tesla. BC is not a means of exchange, and knowing the way investment bankers think, I can guarantee Morgan Stanley was simply hedging itself when it made some positive grunts. Investors who are long BC were either playing dice or desperate.

And when I read the current No1 top market’s favourite analyst saying Bitcoin will go to $400,000 on the basis every corporate treasury could end up with 10% of assets in Bitcoin… I have to laugh. It aint going to happen. When corporate treasuries become Monte Carlo gambling shops, them we really will be in trouble..

I am not going to waste my morning ranting about Bitcoin. It’s not just me. There is a piece by Nouriel Roubini in the FT: Bitcoin is not a hedge against tail-risk. It’s worth a read, but broadly says much of the same things I wrote earlier this year in “Gosh who would have thot” about BC inconsistencies, or a more general critique back in November: Get Real About Bitcoin.

Meanwhile, I am sincerely thankful for the Tesla shares in my portfolio (a happy accident of forgetting to change dividend reinvestment instructions when I sold my main block years ago), but dashed if I believe in its current hyperbolic value.

To be blunt, I’m much more interested in what GM, VW, Hyundai, Toyota and Lucid are doing in the new auto and EV space. I’m thinking Lyft and Waymo rather than Tesla for automous driving, but who cares what I think… The fanboys have ascribed all value in the EV, Autonomous, and Battery space to Tesla – which is brilliant. It means the other names are cheap.

Tesla makes fine cars, but if you want to believe that a company with such a spotty profit record, fragile growth prospects in an increasingly crowded competitive space, and a poor environmental and governance record, is worth so much… be my guest.

Whatever, Tesla and Bitcoin have made investors seriously rich. And yes, it hurts, when I get tweeted to enjoy “staying poor” because I didn’t buy them. Yet, I console myself that most of the now fantabulously wealthy holders and believers are mere lucky followers. They know no what they do. They will be scalped if they don’t get out in time.

But I also suspect a fair number of holders of these speculative bets have played a blindingly smart game – correctly reading the market’s mindest and placing bets accordingly. Many of them will hold exactly the same beliefs about the fragility of the crypto ecosystems, or the overvaluation froth of Tesla. Their success has been to play the Sentiment game.

Which is why this spoof job advert is so brilliant (well I think it’s a spoof…) It’s for the role of “sentiment trader” at Cindicator Capital (which is a “quantitative crypto fund powered by hybrid intelligence”). The role of the sentiment trader will include:

Among the required skills will be: Clear, unbiased thinking that defies authority, a refined taste for memes and a sense of humour, and critically, “NO higher education in economics or finance. Alternatively, prove that you’re free from any mainstream financial brainwash.”

It’s a clever joke, correctly picking up the current market reality that anything we took to be true of markets is now irrelevant. Playing to the flow of the crowd is new game. You can see that across markets – it’s what thought-leaders say and do that is leading the markets. Its most obvious in Elon Musk’s clever manipulation of Bitcoin, its there in the statements of SPAC sponsors promising a big acquisition in the Canabis space who then buy a Space-focused company instead. It’s there in the voices of crypto fantasists.

You have three choices.

i) Be part of the herd and willy-nilly follow the noise and froth around speculative assets – eventually you will be rounded up, driven into a big lorry and taken to a grim looking building….

ii) Be part of the pack, and play the sheep on the way up and down, or

iii) Stand aloof from it all, suffer FOMO, but stick to investing in what you know and understand…

Watch Live: President Biden Addresses The Nation (But Won’t Do A Press Conference)