Zoom Video returned to its steamrolling ways, trading as if the pandemic will never end and people will work via Zoom call in perpetuity, when it reported Q4 earnings that smashed expectations, and projected Q1 revenue and EPS that blew away analyst estimates.

Zoom said it had 467,100 customers with over 10 employees at the end of the fiscal fourth quarter, up 470% on an annualized basis, compared with 354% growth in the previous quarter. During Q4, Zoom said it had accumulated more than 1 million seats paying for Zoom Phone, a service that allows people to virtually make and receive phone calls, route calls and accept voicemail.

The company’s guidance was even more impressive: ZM now expects Q1 revenue between $900.0MM and $905.0MM, blowing out sellside estimates of $829.5 million, if not quite above the high end of the $727.0 million to $948.0 million range. The company also expects adjusted EPS 95c to 97c, versus an estimate of 72c, and this time coming well above the higher end of the analyst range of 49c to 93c.

Commenting on the results, Eric S. Yuan, Founder and CEO, said “as we enter FY2022, we believe we are well positioned for strong growth with our innovative video communications platform.”

The company, which has 11 buys, 15 holds, 3 sells (ratings which will be revised sharply higher tonight), initially dipped on what appeared to be another priced to perfection report, only to rip higher, and was last seen trading more than 10% higher than the Monday’s closing price of $409.66, which had brought the YTD move to +22%, and was trading most recently at $450. 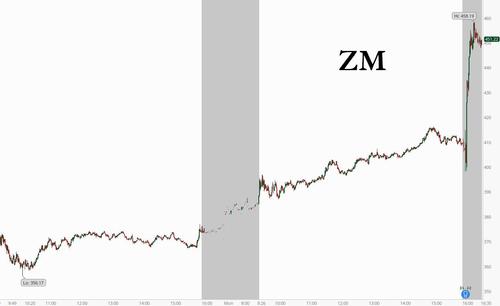 Have the Courts Been Compromised Too? Where are the Righteous Judges? Supreme Court Slows President Trump’s PA Case!